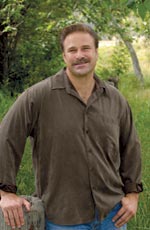 Since 1987 Pastor Joe Schimmel has been equipping Christians with the truth of God’s word. His testimony of the transforming power of Jesus Christ in his own life can be seen in the powerful exposé, They Sold Their Souls for Rock n Roll, and has been heard during live presentations at churches around the world in which he describes his own deliverance from the bondage and satanic influence of Rock Music at the age of 18. This calling and love for the Lord led Joe to start Good Fight Ministries in 1987 with a mission to reach a lost and dying world with the glorious Gospel of Jesus Christ. As head of Good Fight Ministries and Senior Pastor of Blessed Hope Chapel in Simi Valley, California since 1990, Joe’s life work and ministry are dedicated to carrying out the Great Commission of Jesus Christ (Matthew 28:19-20).

In addition to the video production, They Sold Their Souls for Rock & Roll, and its predecessor, Rock & Roll Sorcerers of the New Age Revolution, Good Fight Ministries, under the direction and guidance of Joe, has faithfully continued to expose “the unfruitful deeds of darkness” (Ephesians 5:11) with subsequent film and television exposés. These include Hollywood’s War on God, and affiliate productions such as The Kinsey Syndrome, which exposes the hidden deceptions of the sexual revolution and Satan’s attempt to corrupt the hearts and minds of believers and non-believers alike.

Joe’s objective for Good Fight Ministries is to teach and encourage spiritual warfare against the powers of darkness, and to share important insights as they relate to biblical prophecy and the end times. Joe provides information from a biblical and spiritual worldview to help people make informed life choices that often have eternal consequences. He carefully researches growing religious trends and ideas that attempt to undermine biblical Christianity, providing written articles and video exposés covering various trends in present pop culture. To His glory, God has used Joe’s videos and live presentations to bring thousands of people to Christ, as well as impact and strengthen several thousand families. You can read some of these testimonies on Good Fight’s official website at www.goodfight.org.

Parallel to the outreach of Good Fight Ministries, Joe’s ministry at Blessed Hope Chapel continues to strengthen and grow both families and individuals alike in their walk with the Lord. Under Joe’s teaching and encouragement, Blessed Hope is a fellowship of fruitful Believers committed to the truth of God’s word, praise and worship to His Holy Name, and submission and service in seeking His will for their lives and the church body as a whole. Along with his brothers and sisters in Christ, Joe and his family are actively involved in street evangelism and international ministries which include on-going mission trips to Central America, Europe, and the Middle East as they reflect the love of Christ, and God’s message of hope to a sinful and dying world, through Jesus’ redemptive sacrifice on the cross.