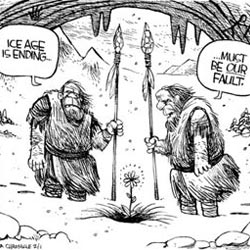 The sordid revelations discovered in recently leaked e-mails from the University of East Anglia’s Climate Research Unit further confirm what many of us have long suspected regarding the global warming hoax: that elitists are cherry-picking data, rigging peer reviews, ignoring pertinent facts and using “tricks.” All of this in an effort toward perpetuating a myth of manmade global warming to sell the world on a Chicken Little “The Sky is Falling” scenario.

Whether it is a CRU scientist acknowledging, “We can’t account for the lack of warming at the moment and it is a travesty that we can’t,” or Phil Jones, head of Hadley CRU, advocating they “hide the decline” of global temperatures, the CRU weather balloon, filled with so much hot air, is out of the bag! This revelation of CRU’s dark underbelly, however, is only the tip of the iceberg in what will very likely go down as the greatest scientific fraud of the 21st century.

After British filmmaker Phelim McAleer asked Al Gore at the Conference for Environmental Journalists what he was going to do to revise his film, An Inconvenient Truth, after a British High Court in London found nine significant errors, his microphone was abruptly shut off. (The Huffington Post, Oct. 10, 2009)

Even the notoriously liberal Newsweek pointed out that after one scientist Gore interviewed informed him that significant amounts of CO2 emissions (the great peccadillo at the heart of the manmade global-warming theory) could be soaked up through proper soil management, they said it posed a “dilemma for Gore” and a “political clash.” Why? Because Gore needs the threat of global warming to advance his radical leftist global agenda!

After Gore found out that Timothy LaSalle, CEO of the Rodale Institute, was informing the public that CO2 need not be a problem, stating, “If we feed the biology and manage grasslands appropriately, we could sequester as much carbon as we emit,” Gore’s assistant told LaSalle to dial down his estimate.

All of this begs the question, why “dial down” good news and “hide the decline” of global temperatures? How is it that we are enduring the ninth-coldest year on record, Greenland’s ice mass is “increasing,” and the world’s polar bear population is “growing,” while certain politicians and scientists continue to engage in shameless deceit? The reason so many leftist politicians “hide the decline” is so they can manipulate the fears of the masses and cause them to seek refuge in the arms of Big Brother. Sadly, many scientists cannot resist the temptation to support such scenarios because it insures that they will receive huge financial grants and enjoy elite status in the liberal academic community.

Furthermore, it is no secret that Al Gore and others are exploiting environmental issues to further a global agenda. Al Gore wrote in his book Earth in the Balance, “We are close to a time when all of humankind will envision a global agenda that encompasses a kind of Global Marshall Plan to address the causes of poverty and suffering and environmental destruction all over the earth.” Gore shamelessly calls for us to surrender to a “a central organizing principle. …”

Ultimately for elitists, truth is not the issue – control is. Timothy Wirth, who currently heads the United Nations Foundation, said, “We’ve got to ride this global-warming issue. Even if the theory of global warming is wrong, we will be doing the right thing in terms of economic and environmental policy.” (Michael Fumento, Science Under Siege: Balancing Technology and the Environment (William Morrow & Company, 1993), p. 362)

The Club of Rome, which consults with the U.N., has searched for appropriate bogeymen, in an effort to frighten the masses and herd them into uniting under the watchful eyes of Big Brother:

“In searching for a new enemy to unite us, we came up with the idea that pollution, the threat of global warming, water shortages, famine and the like would fit the bill. …” (Alexander King & Bertrand Schneider, The First Global Revolution (New York: Pantheon Books, 1991), p. 115)

Incredibly, Stanford professor of climatology Stephen Schneider, who has been the lead author of several U.N. Intergovernmental Panel on Climate Change reports, sees no problem in using the threat of global warming to scare people to death, even if it means being dishonest:

“We need to get some broad-based support, to capture the public’s imagination … so we have to offer up scary scenarios, make simplified, dramatic statements and make little mention of any doubts. … Each of us has to decide what the right balance is between being effective and being honest.” (Jonathan Schell, Our Fragile Earth (Discover, October 1989); p. 44, emphasis mine)

Christine Stewart, the former Canadian minister of the environment, unabashedly told editors and reporters for the Calgary Herald that using pseudoscience, no matter how phony, is permissible if the objective is to bring about a New World Order:

“No matter if the science of global warming is all phony … climate change [provides] the greatest opportunity to bring about justice and equality in the world.” (Calgary Herald, Dec. 14, 1998)

All of this looms even more ominous for the United States as President Obama will be in Copenhagen on Dec. 10, as a precursor to signing the climate-change treaty. While world leaders have been rather deft in relating what exactly they will be signing us up for, Lord Christopher Monckton, the former adviser to Margaret Thatcher who has read the 181-page draft, divulged that it calls for a “new world government” and warned Americans that “unless you stop it, your president will sign your freedom, your democracy, and your prosperity away forever.”