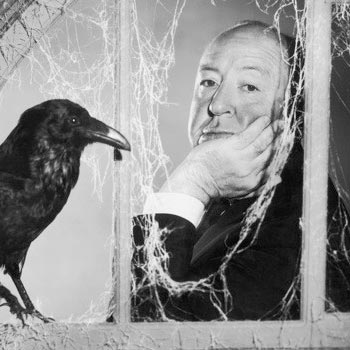 Tom Montgomery writes, “Asking Americans about the pervasive influence of media in this culture is a bit like…asking fish about water. ‘Water? What water?’ We live and breathe media-but we are largely unaware of how they shape our lives.” By pulling an audience into a movie, a filmmaker can make them an accomplice to any situation he pleases, thereby causing them to experience feelings and a state of mind otherwise unattainable. As Robert Merton observes,

Of course, that is exactly what Hollywood films tend to do, “appeal to sentiment” to “the exclusion of pertinent information.” George Lucas relates, “I’m very much of a visual filmmaker, and very much a filmmaker who is going for emotions over ideas.” These emotional effects transcend the logical mind, dynamically seducing the audience into a position of complacent submission to the film.

The “Master of Suspense” film director, Alfred Hitchcock, frightened audiences and sent multitudes home from theaters shocked and dismayed at what they had witnessed. Endless murders, rapes, violence and perverse evil imaginations found their way into the minds of Americans under the tutelage of Hitchcock. He stated:

“The point is to draw the audience right into the situation- instead of leaving them to watch it from the outside, from a distance….If you played the whole scene straight through…you would lose your power over the audience. They would watch the scene without really becoming involved in it, and you would have no means of concentrating their attention on those particular visual details which make them feel what the characters are feeling.”

This emotional ingredient of film easily dominates the intellectual aspects of thought processes.

Accordingly, the desire to manipulate an audience’s senses to the furthest extreme was the root of his love for the cinema. Hitchcock envisioned the future’s ability to more effectively rip away peace of mind through his films, stating:

“The audience is like a giant organ that you and I are playing. At one moment we play this note on them and get this reaction, and then we plat that chord and they react that way. And someday we won’t even have to make a movie- they’ll be electrodes implanted in their brains, and we’ll just press different buttons and they’ll go ‘ooooh’ and ‘aaaah’ and we’ll frighten them…Won’t that be wonderful?”

How deep do the wounds really go that Hollywood inflicts through their scare tactics? A study printed in The Daily News underscores the answer-it reads as follows:

“If ‘Jaws’ scared you out of the water or ‘Psycho’ changed your shower habits, a study suggests you’re probably not alone. A survey found that one in four had some lingering ‘fright’ effect from a movie or TV show they saw as a child or teenager…There are people who shower with the door open, even though they’re quite sure there isn’t a killer in the house.”

Are the findings of this study a reality? Definitely. Emotions have the ability to manipulate perceptions and points of view while rendering the viewer hopelessly submissive to their effects. One would be inclined to believe that those who work behind the scenes in these films would be the least bit disturbed by their creations, clearly understanding that their scenic manipulations are set up. But, in Hitchcock’s cinema terms, “the power over the audience” is so perfect, so complete, that oftentimes those who prey on the fears of others through film become victim to their own infernal devices. 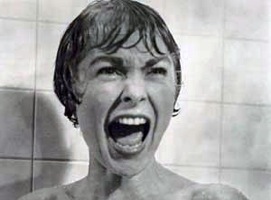 Renown actress Janet Leigh portrayed the character who is dramatically stabbed to death in the infamous shower scene in Hitchcock’s Psycho. This scene notoriously sent immense shock waves of fear throughout the entire world as people were subsequently so terrified from watching this "entertainment" that they were literally sent over the edge. Remarkably, of her personal aftermath from Psycho, Janet Leigh herself confesses:

“It’s true that I don’t take showers. If there is no other way to bathe, then I make sure that all of the doors and windows in the house are locked, and I leave the bathroom door open and the shower curtain or stall door open so I have a perfect, clear view. I face the door no matter where the showerhead is.”

Her of all people should be the least afraid of such circumstances. Leigh amazingly reveals the defining factor that forever shaped her life:

“Prior to Psycho I was a relatively normal bather, but after was a different story. It wasn’t the shooting of the scene that caused the damage, it was seeing the film in its entirety later.”

So effective is film in its non-partial derision of sanity and so viciously wild is its ferocious exertion on the mind that it easily devours even those who believe they can tame the beast. Instead, as the apostle Peter wrote under the guidance of the Holy Spirit:

"Therefore, putting aside all malice and all deceit and hypocrisy and envy and all slander, like newborn babies, long for the pure milk of the word, so that by it you may grow in respect to salvation, if you have tasted the kindness of the Lord." –1 Peter 2:1-3