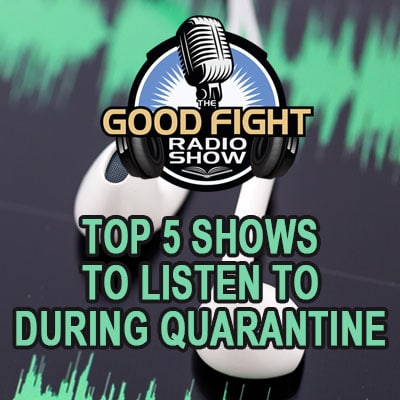 Are you in quarantine? Do you have a little more time on your hands than usual?

Well, we have something fun for you and it will take you less than 3 hours to go completely go through it! As host of the Good Fight Radio Show, I (Chad) thought it would be fun to go through my Top 5 episodes to listen to during quarantine! Maybe you have some favorites of your own, but with over 150 episodes recorded to date, these are the ones that stick out to me in our first 150. Let us know in the comments which ones you like best!

You may be interested to find out that this episode was somewhat made on a whim. As we prepare each week for the shows ahead, I (Chad) usually send a message to Tony and Joe about topics that we should discuss. Outside of last second changes (which tend to happen here and there), we usually agree on all the shows and set out for our own research before meeting and recording. With this episode, we had planned something entirely different. But when Joe got to the office and was missing some of his notes, I realized that our day of recording had actually fallen on Walt Disney’s birthday. It was then that we sat down, shifted the plan and simply recorded the episode entirely on Mr. Disney and the occult undertones in his films. It even looks like this episode has spurned Joe into making a new video regarding Disney …. Lord willing!

This episode was done while pastor Joe was out of town. The need to fill 10 total episodes of content (between Good Fight Radio and 5:11 News) for two weeks proved to be as fun as it was challenging. I do advise anyone starting a podcast to have some awesome guys alongside of you, if you can, because it makes the entire experience easier and more fun. I mean, what’s better than hanging out and talking Scripture with brothers in Christ? That’s pretty much what I get to do with Tony and Joe! Anyways, in regard to this episode, the studying of Steven Furtick can be somewhat nauseating. His teachings are bombastic, but lack any understanding of scripture or theology. When given the perfect opportunity to share the unwavering Gospel of Jesus Christ with radio host “Charlemagne Tha god”, he explains that the clear statements of the exclusivity of Christ are really inclusive statements and fumbles the opportunity to give any presentation of God’s saving grace. With that said, you will hear a little mix-up, by me, of which parable he was speaking about, as one follows the other in Matthew 13:18-30. But you will certainly hear him messing up the narrative that Christ has in mind in the clip. This podcast is by far the most downloaded podcast that we have on The Good Fight Radio Show’s Podbean outlet, and that speaks to the pull this man has. It is for that reason that the first 5:11 News Show that will be shot in our new studio will be done covering this very topic.

When news got out that Joel and Victoria Osteen went to see Lady Gaga, we were absolutely stunned! Ok, maybe not. Joel is a false teacher along with his wife, who has taught from the pulpit and is heard teaching heresy in this very episode. We took a time in which Joel was in the headlines to expose some of their false teachings, along with some of the dangers of listening to Lady Gaga. One of my favorite things about recording these shows is that the news never stops. We are never light on the content because every time I want to discuss some doctrine, something wild and crazy happens in the world or in Christendom. The goal is always the same. Bring every thought captive to the obedience of Christ and help explain contemporary issues in a way that glorifies God and examine them through the lenses of Scripture.

What the Bible Says About Suicide

While this topic is never an easy one to discuss, we believe that a proper Biblical perspective is what is needed to properly navigate through any discussion. How do you handle a suicide in the church? How about when it comes from a pastor? How about when it comes from a pastor who’s entire ministry is dedicated to pulling people out of the sin of suicide? We did our best in this two part series to delicately and truthfully answer this important subject. The Bible warns, even tells us, that screaming loud blessings early in the morning shall be taken as curses (Proverbs 27:14). So yes, we can say the right thing, at the wrong time, in the wrong tone. Through prayer and supplication, I believe this two part series helped those who were attempting to navigate through this issue, while keeping their Biblical integrity intact.

An Answer to an Open Rebuke to Good Fight Ministries

This answer actually took two episodes exposing how this “Discernment YouTuber” consistently showed his lack of understanding concerning Scripture, as well as his blatant hypocrisy. Something interesting to note about our response to the man who made the claims mentioned in the video, is when we attempted to address him directly, he deleted our attempts (and the attempts of others) to reach out to him and explain his misunderstanding of Scripture. He then came on to our page, where he began to deceitfully edit his responses. We would address the questions that he had written to us, and after we would answer those questions, he would begin to make new ones and edit his original responses to make it appear as though we were not responding to all his questions. But he was ignorant of the little button that allows you to see what he edited and when. Sadly, even though we explained to him that we knew what he was doing, and that we had taken pictures of his little trick, we gave him multiple chances to repent…and He did it again! After he was eventually blocked, he went on to make more attack videos that only proved his unwillingness to reason and the hypocrisy of those who preach with such venom mixed with ignorance.

We are always encouraged by the messages that so many have sent us regarding how this show has impacted their walk with Christ and the fruit we have seen from it has been the life-blood of our continued efforts in bringing this show to you. May God richly bless you and bring us out of this quarantine more spiritually nourished than we were when it began!