Who is Raising Your Kids, Celebrities or Jesus? 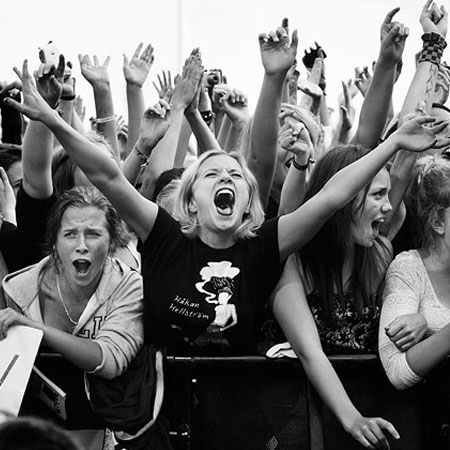 One of the more problematic trends that has befallen the modern Christian church is that it has become enamored with something I would call, “spiritual celebritism”. This is when a Christian is so enthralled by a celebrity that they feel the need for this celebrity to love Jesus and, in doing so, bring about some sort of validation in their personal faith. They will search and scour for any modicum of belief in a higher power, and declare the celebrity a blood-bought believer. A quick scroll down Facebook and you are likely to find a sponsored post from a “Christian” site with articles such as ”10 Celebrities you didn’t know were Christians” or “Look how *Insert Popular Celebrity here* stood up for their faith!” Many of these celebrities have not even proclaimed a belief in Christ, and most live their public lives completely contrary to Scripture (Lord knows what they do when they aren’t under the paparazzi’s watchful eye). The constant need for Christians to have a celebrity spokesperson has made it abundantly evident that far too many believers place too much weight on the oftentimes erroneous spiritual positions of these celebrity spokespersons.

If Justin Bieber sings a worship song at his concert right after taking his shirt off and gyrating about with seductive dancers, you best be sure thousands upon thousands of Christians are going to click that “Share” button for all their friends to see. If Kendrick Lemar brings up the slightest reference to Scripture, or how he went to church when he was younger, right after dropping a couple of “G** D***’s” in a song, you can be sure that he will get his fair share of “Likes” from the evangelicals on Facebook.

Tragically, this insatiable need for celebrity approval does not go unnoticed by our children. Walk in early to almost any church’s youth service today and observe what the conversations are about. Their usual exchange is likely to involve much of what is going on in shows like “Keeping Up With The Kardashians,” how they think Miley Cyrus is such a good coach on “The Voice,” and how much they like that new Taylor Swift song. They all like the same things and they feel the necessity of keeping up with the most current news and gossip surrounding these superstars.

But you know what is usually missing? Any sort of biblical knowledge outside of an elementary level. They honestly know more about Katy Perry’s dating life than they do about the Scriptural proofs for the resurrection! They know more about the new Drake album than they do about the Psalms of David! Far too often parents will say that they don’t want to “force” their children to go to church, but they “force” them to go to school 5 days a week. Children can spend 8 hours at school, 4 hours on video games, yet have a hard time spending 20 minutes in their bible!

So who is to blame for such confusion and rebellion?

I believe this answer is multi-faceted. The first people to consider has to be the people that God has given the duty of watching over them, their parents. When Israel was given the Shema Yisrael in Deuteronomy 6, God told them how they were to teach their children:

They are to be taught diligently. To be diligent is to show care and conscientiousness in your work or duty. That means it is going to take sacrifice. If we are not raising our children up in God’s word, they will learn and shape their worldview by some other means. They will look to those who are being admired by their peers for their guidance. Those who have a lot of money. Those who get with whatever guy/girl they want! They must be doing something right! Right? This is exactly what Satan does to appeal to them. Do you think those at MTV and elsewhere are ignorant of this? Bob Pittman, the Founder and former President of MTV, made this startling claim when speaking with the Philadelphia Inquirer:

“The strongest appeal you can make is emotionally. If you can get their emotions going, make them forget their logic, you’ve got them. AT MTV, WE DON’T SHOOT FOR THE 14-YEAR OLDS, WE OWN THEM.” (“MTV is Rock Around the Clock,” Philadelphia Inquirer, Nov. 3, 1982)

One of Satan’s continued plans over the years has been to destroy the family. While God has made the family unit a priority throughout Scripture, Satan has set it as one of his primary targets of attack. This should come as no surprise to us, as God’s word warns that in the end times the love of the family will be lacking. In the third chapter of Paul’s second letter to Timothy, we are given an exact description of what the end times will look like. When describing some of the perilous issues that will be facing the world at that time, Paul stated that the world would be “unloving”. The word that Paul used to describe such a thing was, ἄστοργοι or “astorgoi”. The “a” before the Greek word, Στοργή (Storgē), acted as a negative particle to show a lack of something. You can see an example of this in the English word “atheist”. The letter “a” acts as the negative particle to the word “theist”. This means that a person lacks the belief in God that a “theist” would have. So what kind of love is Στοργή (Storgē)? Storgē is the Greek word for “natural” or family love. This kind of love is so innate that even the pagans have it. Paul uses the term to show that in the most perilous of times there will be a lack of the very love that comes naturally – love for one’s family. In fact, the father of modern Satanism actually identified family as “Public Enemy Number 1”. The goal of the Satanist Aleister Crowley was to go after the youth and get them early. In Crowley’s book The World Tragedy he pointed his target directly at the youth, by which he was to build his army:

“Let me seduce the boys of England and the oldsters may totter unconverted to their graves. Then these boys, become men, may bring about the new Heaven and the new Earth…but without an army I am useless…give me my army, young men; and we will sweep these dogs into the sea.” (The World’s Tragedy, Aleister Crowley, New Falcon Publications, 1910, p. XXV)

Sadly, this has happened with the help of the media, just as Crowley predicted. While it may have started with a radio broadcast and/or a night out at the cinema, the plenteous amount of entertainment our society has grown accustomed to has ripped away from our close communion and time with our God. It was Leonard Ravenhill who said, “Entertainment is the devil’s substitute for joy. The more joy you have in the Lord the less entertainment you need.” Far too many parents have substituted time with their kids for more time at work or play and even use television as a babysitter! We have even seen those in cinema point out this fact to us through the very means by which they are offering their programming. Movie star Jim Carrey was always known for his comedic roles through the 1980’s and 1990’s, but in 1996 Carrey took on a darker role in the psychological comedic thriller, The Cable Guy. In the film, Carrey played a disturbed man who had grown up entirely through the use of television. By the end of this man’s life he realized that it was all a sham. In the final climactic scene he states:

“You were never there for me were you mother? You expected Mike and Carol Brady to raise me! I’m the bastard son of Claire Huxtable! I am a Lost Cunningham! I learned the facts of life from watching The Facts of Life!” The Cable Guy, Columbia Pictures, June 1996

While Carrey’s character had access to copious amounts of television before he became the raving lunatic described in the film, at least he was able to get away from it for a few hours when he went to school. This is not the case with our current generation. They take their TV with them wherever they go. They pull up videos on their phones, watch hours and hours of content as they meditate on whatever someone else finds riveting enough to send to them. Take a look at any young adult today watching a television show or a sports game. Take a glance over and take note of how many times they pick up their phone to look at videos or pictures that their friends (or many times people they have never even met) are posting or sending. While they are watching TV they can’t even fully pay attention to what is actually playing on it. They need more and more stimuli because of their insatiable appetite for constant content.

With apps like Twitter, Instagram, Facebook, and SnapChat they have direct access to their favorite celebrities. They know their political views, spiritual views, and even what they ate for dinner! When their favorite celebrity starts talking about their spirituality…they listen. Imagine a young daughter who has grown up with the likes of Hannah Montana as a role model. Hannah has now become Miley Cyrus. Miley not only has all the money in the world, but people worship her. She even gets to date Liam Hemsworth (as well as other men and women)! Do you think that young girls do not grow envious of something like that? Do you think that they do not wonder why Miley can have him and they can’t? What is she doing that they are not? What happens when Miley talks about popping Molly (slang for the drug MDMA or Ecstasy) and says that marijuana is her favorite drug to use? What about when Miley retweeted an image of the galaxy with a quote from atheist Lawrence Krauss that stated “forget Jesus. Stars died so you can live”? Do not think that young kids do not take notice to these things. 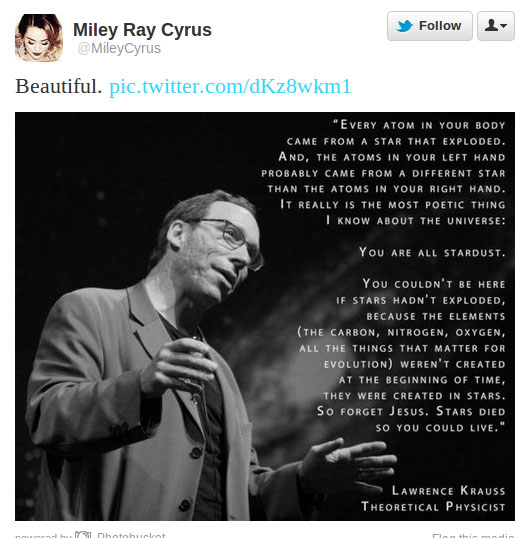 The only solution to this problem comes in the form of Jesus Christ. As parents, we are to live out Godly lives before our children so that they do not simply hear lip-service. Jesus told us that our Father in Heaven is seeking those who will worship Him in spirit and truth (John 4:24). He is not after white-washed tombs. He is not after only hearers of the word, but doers also. Let your light shine before your children and wash them in God’s word. Know who it is that they are following and encourage them to have proper role models. It was the apostle Paul who stated, “Be ye followers of me, even as I also am of Christ” (1 Corinthians 11:1). Our children should have role models whose ultimate role model is Jesus. God’s word says that “the prince of the power of the air … is now working in the sons of disobedience” (Ephesians 2:2). Satan will use those who are not obedient to God’s call on their life to influence and destroy your family. This is not by accident and this is not a battle of flesh and blood. You are battling “against principalities, against powers, against the rulers of the darkness of this world, against spiritual wickedness in high places” (Ephesians 6:12). If you lay down your armor and do not fall under the mighty hand of God you and your family are going to lose this battle (Ephesians 6:10,13-18). Recognize that you are in a battle and come prepared with God’s proper protection! Submit therefore to God. Resist the devil and he will flee from you (James 4:7).