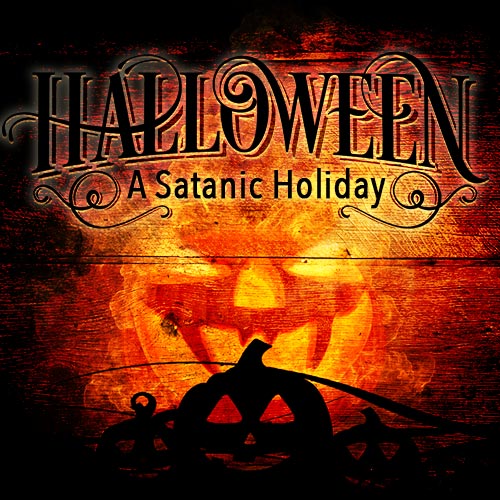 Halloween and its roots in witchcraft and Druidic paganism are undeniable. When we examine the history of Halloween, one thing we find out very quickly is that it is based on the ancient pagan religion of the Celtics in Northern Ireland and their celebration of the festival of the dead, known as Samhain. In Northern Ireland, a class of ruthless priests known as the Druids ruled Northern Ireland through occult terror and human sacrifice for centuries.

Today, Ireland celebrates Halloween with fireworks displays and is the only nation on earth that recognizes Halloween as a national holiday. Children in Ireland are given a week off from school for its observance. 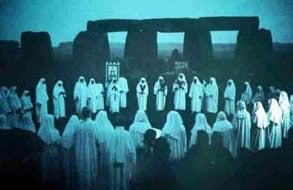 Druid Festival of the Dead

Halloween, as we know it today, is a modernized version of the Druidic festival of the dead. The powerful Druid priests were deemed kings of the occult practitioners, and were known for worshipping evil spirits and sacrificing humans to their demon gods!

The Celts celebrated the day of death in anticipation of the dark, cold winter months. The eve of Samhain marked the special time of the year when the Druids taught that demons, souls and gods were unleashed on the world to bring blessing or wreak havoc and destruction on unsuspecting souls.

“In ancient Britain and Ireland, the Celtic festival of Samhain was observed on October 31 at the end of the summer … The souls of the dead were supposed to revisit their homes on this day and the autumnal festival acquired sinister significance, with ghosts, witches, goblins, black cats, fairies and demons of all kinds said to be roaming about. It was the time to placate the supernatural powers controlling the processes of nature. In addition, Halloween was thought to be the most favorable time for divinations concerning marriage, luck, health, and death. It was the only day on which the help of the devil was invoked for such purposes.” (Encyclopedia Britannica, 2005, "Halloween")

Today, Halloween is a truly occult holiday for many Celtic Neo-Pagans, Wiccan witches and Satanists alike. Many who are involved in the dark arts and traffic in spiritism, view Halloween as a religious holiday and are acutely aware that it is rooted in the occult. (Hutton, Ronald, The Pagan Religions of the Ancient British Isles: Their Nature and Legacy, Oxford: Blackwell, 1991, pp. 327–341) 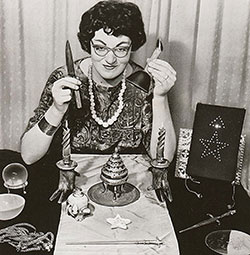 Witch and Wiccan high priestess, Doreen Valiente, who authored "The Witches’ Rune" and helped pen a significant amount of the occult content that is foundational to modern day Wicca, stated that Halloween is a special holiday for witches.

Valiente helped formulate modern Wicca (known as Gardnerian Wicca) after it was first created by Satanist Gerald Gardner, who was also a disciple of Satanist Aleister Crowley and a member of Crowley’s satanic organization known as the O.T.O. Unknown to most Wiccan’s, Gardner subsumed many of Crowley’s satanic teachings on ceremonial "magick" into Wicca and used a variation of Crowley’s satanic maxim “Do What Thou Wilt” for the wiccan Rede (e.g., That it harm none, do as thou wilt)

“Halloween is one of the four Great Sabbats of the witches that everyone has heard about. To witches, Halloween is a serious occasion, however merrily celebrated. It is the old Celtic Eve of Samhain.”

Sharon Graham, who fancies herself as a high priestess of Salem witches, and who was charged in a feud with other witches for intimidating a witness by allegedly placing a raccoon’s head on the doorsteps of Angelica of the Angels and the Goddess’ Treasure Chest, said of Halloween:

"Salem (Massachusetts) is a mecca, especially around Samhain. It is our holiday, our new year, and a lot of witches come here from all over the world." (Source)

Halloween is considered a satanic holiday for many confessing Satanists, and for obvious reasons, as it is a day where demons, witches and devils are glorified. The first Greater Church of Lucifer in Houston, Texas chose Halloween as the perfect day to officially open its doors to the public. (Source) 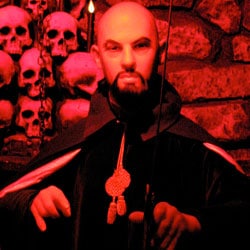 According to Anton LaVey, who founded the Church of Satan in 1966 and authored The Satanic Bible in 1969, Halloween is the third highest day on the satanic calendar for Satanists. LaVey wrote in The Satanic Bible:

“After one’s own birthday, the two major Satanic holidays are Walpurgisnacht (May 1st) and Halloween.” (LaVey, Anton Szandor, The Satanic Bible, 1969, p. 96)

The official website for the Church of Satan states on their FAQ page that Halloween is a time when the masses “reach down inside and touch the ‘darkness’ which for [us] Satanists is a daily mode of existence,” as they may freely “indulge their fantasies by donning costumes that allow for intense role-playing and the release of their demonic core.” (Source)

Halloween is steadily gaining ground on Christmas as America’s favorite Holiday. In 2014, the National Retail Federation’s annual consumer spending survey revealed that Americans spent a whopping $7.4 billion to celebrate Halloween. $2.8 billion was for costumes ($1.1 billion for children’s costumes and $1.4 billion for adults). Another $2 billion was spent on demonic decorations and the rest on candy.

While many still choose to rejoice and celebrate our Lord Jesus’ birth on Christmas as the incarnation of God in human flesh (John 1:1-3, 14), for many Christmas has become nothing more than a materialistic endeavor.

It makes perfect sense that Christmas would fall by the wayside and Halloween would grow in prominence, as the scriptures warn that many would turn from Christ in the last days and that an occult revival would ensue as a harbinger for the coming Antichrist and new world order (Matthew 24:9-10, 24-25; 2 Timothy 3:1-8; 2 Thessalonians 2:9-12; Revelation 13:1-18).

The Scriptures tell us:

“For this purpose the Son of God was manifested, that he might destroy the works of the devil” (1 John 3:8b).

“He has rescued us from the dominion of darkness and brought us into the kingdom of the Son he loves, in whom we have redemption, the forgiveness of sins” (Colossians 1:13-14).

When we came to Christ we were delivered “from darkness to light and from the dominion of Satan to God” (Acts 26:18), should we then return to Satan’s kingdom and celebrate after having been set free?

As Christians we are warned no to participate in the celebration of evil but the rather expose them:

“Do not participate in the unfruitful deeds of darkness, but instead even expose them” (Ephesians 5:11).

Rather than dressing up like demons, witches and devils, we are to “abstain from all appearance of evil” (1 Thessalonians 5:22)

Though I personally have some Irish heritage, I know better than imitating Druidic paganism:

“Thus says the Lord, “Do not learn the way of the nations…”

As Christians we ought to be repulsed by a holiday that celebrates the very things that our God and Maker calls abominations. Deuteronomy 18:9-14 is the biblical passage that most directly addresses the customs of Halloween. Note how the Lord warns that He expelled those who had inhabited the Promised Land for engaging in such practices and He warned His people that he would do the same to them should they imitate their practices:

“When you enter the land which the LORD your God gives you, you shall not learn to imitate the detestable things of those nations. There shall not be found among you anyone who makes his son or his daughter pass through the fire, one who uses divination, one who practices witchcraft, or one who interprets omens, or a sorcerer, or one who casts a spell, or a medium, or a spiritist, or one who calls up the dead. For whoever does these things is detestable to the LORD; and because of these detestable things the LORD your God will drive them out before you. You shall be blameless before the LORD your God. For those nations, which you shall dispossess, listen to those who practice witchcraft and to diviners, but as for you, the LORD your God has not allowed you to do so” (Deuteronomy 18:9-14).

We see here one of the most inclusive lists of activities upon which Halloween was established that can be found anywhere in the bible, and the practitioners thereof are labeled “detestable.” Those habits are, in fact, the very reason the Pagan nations were driven out of the Promised Land.

We would encourage you to prayerfully consider celebrating Jesus and His glorious kingdom of light on Halloween, rather than the kingdom of darkness. At Blessed Hope Chapel, where I serve as Pastor, we celebrate the Lord and His winning of souls in a Harvest Festival on October 31st each year. It is a great time for both children and adults alike and keeps our focus on Jesus rather than the kingdom of darkness. Many of us also pass out tracts. While others are celebrating darkness and death we celebrate the Prince of Life and share tracts with those who come to our doors looking for a treat. May the Lord lead you and protect you from the evil one as you seek His face!