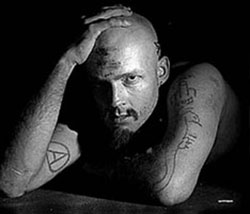 GG Allin has been reported to be so vile "that he makes Marilyn Manson look like a Sunday-school teacher." Allin was a pen-pal of serial killer John Wayne Gacy who brutally tortured and murdered over thirty young men. Allin said of himself before his death that he was the "most violent man in rock and roll." Allin admitted that after someone threw a dead cat on stage at one of his concerts, "I tried to [have sex with] it." Allin was reportedly arrested over four dozen times, including once for slashing and burning a woman. He was also under a Charles Manson-like delusion claiming, while in prison, to be both Christ and Satan rolled into one:

"I believe I am the highest power, absolutely. I am in control at all times. Jesus Christ, God, and Satan all in one." — G.G. Allin