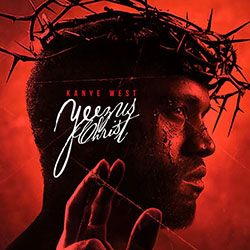 Many concertgoers were shocked to see a Jesus impersonator at the opening night of Kanye West’s Yeezus Tour in Seattle last Saturday night [October 19, 2013]. The scene was set before West’s performance of his 2004 Hit song “Jesus Walks”. The Jesus character stepped onto the stage to meet the Grammy® Award-winning artist, to which West startlingly asks, “White Jesus, is that you? …Oh, s–t!”

What is Jesus doing on tour with Kanye? While chatting with San Francisco’s Wild 94.9’s “The JV Show,” Kanye said of the appearance:

So with “Jesus” by his side on his Yeezus Tour (named after his latest album), we should expect to hear some heart-felt, wholesome, gospel-filled songs, right? Not so much. As Jon Dolan of Rolling Stone put it, “Yeezus is the darkest, most extreme music Kanye has ever cooked up.” With titles like, “Black Skinhead,” “I’m In It” and “I Am a God,” is it any surprise that many Christians are wondering what kind of talks he and Jesus could possibly be having?

Sadly, going through many of the songs from his latest album is a tall task for anyone with any sort of moral compass. The derogatory terms he uses to describe women, and his conquest of them, can be described as nothing less than repugnant. The track “I’m In It” was called “lyrical pornography” by one reviewer, who also pointed out, “If this album makes anything clear, it’s that any female Kanye raps about could be one of thousands.” The song involves Kanye committing a sexual act with a woman and thanking “God Almighty” in the process. The brand new father doesn’t refrain from reminding his listeners that he has “The kids and the wife life, but can’t wake up from the nightlife.” One album reviewer stated that this song has “Perhaps the album’s most explicit lines […] Without much room for levity, Kanye’s complicated and distrustful view of women is unrelenting on Yeezus.” It was proposed that the album could have been entitled “Sorry Kim” (Kanye’s Fiance) rather than Yeezus.

The track “I Am a God” is sure to be the most controversial title on the album. In a concise tweet, West’s songwriter and spoken word artist, Malik Yusef, confirmed that the meaning of the song is rooted in Psalm 82. When we look at this Psalm, it should be noted that it is an imprecatory Psalm. Meaning, the Psalm is one of indignation and judgment. The Psalm begins as follows: “God takes His stand in His own congregation; He judges in the midst of the rulers. How long will you judge unjustly and show partiality to the wicked?”

God is dealing with these unjust judges or “gods” (see Exodus 22:9, in Hebrew “elohim” is used as both judges/gods). Then in verses 6 and 7 He states: “I said, ‘You are gods, and all of you are sons of the Most High Nevertheless you will die like men, and fall like any one of the princes.'” These men, who were appointed as judges, will now be judged by the one true God and die just like any other man. They have dealt unrighteously with the appointment that God had bestowed on them and will face judgment accordingly.

Much of the same can be said of artist Kanye West. God has not only given him life, but the ability to write, sing and rap at the highest level. Rather than using it as a platform for God’s glory, he has used it to propagate himself in the boasting of many sexual exploits, drunkenness, and even drug use. A simple reading of the biblical text by Mr. West might help him realize that calling himself one of these “gods” puts him in a class that he would be best to repent of. If Kanye is a man who truly loves life, and wishes to see good days, he would be sure to keep his tongue from evil. He would not sing these wicked songs that any God-fearing person could not help but be repulsed by. He would worry, as a Teen Choice Award winning artist, that singing about womanizing, adultery and drunkenness could cause many of his impressionable fans to follow suit.

As a brand new father to a baby girl, wouldn’t you think he would be more conscious of how terrible it would be if someone treated his very own daughter the way he describes treating women in his songs?

While having Jesus come on stage might excite some professing Christians who would like to hold onto the worldly, ungodly music of Kanye, it is going to do nothing for Kanye when he comes to meet the real Jesus on the day of judgment. Jesus Himself warned:

“Not everyone who says to Me, ‘Lord, Lord,’ will enter the kingdom of heaven, but he who does the will of My Father who is in heaven will enter. “Many will say to Me on that day, ‘Lord, Lord, did we not prophesy in Your name, and in Your name cast out demons, and in Your name perform many miracles?’ And then I will declare to them, ‘I never knew you; DEPART FROM ME, YOU WHO PRACTICE LAWLESSNESS.'” –Matthew 7:21-23

“For the mouth speaks out of that which fills the heart. The good man brings out of his good treasure what is good; and the evil man brings out of his evil treasure what is evil. But I tell you that every careless word that people speak, they shall give an accounting for it in the day of judgment. For by your words you will be justified, and by your words you will be condemned.” –Matthew 12:34-37

When we speak of the vile, sexually immoral things that go against God’s word we will be giving an account for it before God on the day of judgment. Pray that Kanye would turn to Jesus, repent, and make Jesus his Lord. Not his “homeboy”.