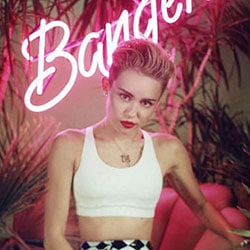 In early January 2014, Miley Cyrus turned to her Instagram account to let everyone know about Jesus! Don’t get too excited though; it is actually to tell others what they should believe about Jesus. Here are the words from the picture that was posted: 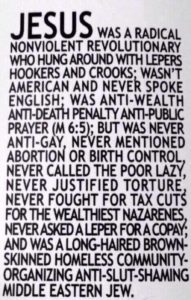 While this is much better than the time she quoted physicist Lawrence Krauss on her Twitter page, telling people “So forget Jesus. Stars died so you can live,” it is still a slap in the face to Bible believers everywhere.

While some of the assertions may be true, overall it is riddled with completely ridiculous statements and flat out ignorance of the Scriptures and who Jesus is. Although Jesus was not American and although He did not speak English, He was certainly not “anti-wealth”. Calling people out for not caring for the poor does not mean He was anti-wealth. The Bible teaches that a man is worthy of his wages (Romans 4:4). We are to honor the Lord with our wealth (Proverbs 3:9). The problem with money is that it brings people to a place in which they become discontent with that which the Lord has provided for them. It is the love of money that is the root of all sorts of evil because people place it above God in their hearts, thus making it an idol (1 Timothy 6:10). While Christ never called the poor “lazy,” His Word does warn of the problem of sluggardness. We are warned that if someone is not willing to work, they are not to eat (2 Thessalonians 3:10). This does not mean the Christian is absolved from helping the poor. In James 2, we are asked if the faith of a man can save him if he sees another brother without clothing and daily food, and only says to him, “Go in peace, be warmed and be filled,” and yet does not give him what is necessary for his body. So yes, it is contrary to Christ’s heart to turn a blind eye to the poor. However, the inference made here makes no sense to the believers who are actively living out their faith.

Jesus was also not against public prayer. He was against men who prayed in public to please man instead of God. He was calling out those who would draw near with their lips, while their hearts were far from Him. He was looking for a people who would truly seek Him, be it in public or not. The picture then attempts to use an argument from silence on issues such as anti-gay, abortion and birth control. But with this logic, one would have to assume that Jesus wasn’t anti-pedophilia, -rape, -incest, nor -bestiality because He never spoke about those things, either.

“God, after He spoke long ago to the fathers in the prophets in many portions and in many ways, in these last days has spoken to us in His Son, whom He appointed heir of all things, through whom also He made the world. And He is the radiance of His glory and the exact representation of His nature, and upholds all things by the word of His power.” (Hebrews 1:1-3a)

And in Philippians Chapter 2:

“He did not regard equality with God a thing to be grasped, but emptied Himself, taking the form of a bond-servant, and being made in the likeness of men” (Philippians 2:6-7).

God became a man. Instead of using a prophet to convey His Word to His people, God became the Word in flesh (John 1:1-14). He alone possesses the very words of Eternal Life (John 6:68). He is the Way, the Truth and the Life, and by no means does anyone come to the Father but through Him (John 14:6). Christ not only referred to Himself as “the Truth” but as the entire Old Testament as well. When praying to the Father for the sanctification of His disciples, He pleaded, “Sanctify them in thy truth, Thy word is truth” (John 17:17). God’s Word is the very barometer by which we judge truth from fallacy, and it is upon that which man is required to feed to keep from spiritual starvation (Matthew 4:4).

In Matthew Chapter 5, Jesus proclaimed that He did not come to abolish the law, but rather to fulfill it (Matthew 5:17)! In verse 18, He makes it abundantly clear so that nobody would be able to twist things, “For truly I say to you, until heaven and earth pass away, not the smallest letter or stroke shall pass from the Law until all is accomplished.” So where does this leave us? Where do we stand with the ancient Israelite laws given to His people thousands of years ago?

Not only were some of these laws made specifically to keep Israel distinct from other nations, but there were also three divisions of the law that must be examined in order to discover the eternal decrees of morality, that which has been fulfilled in Christ, and those that are no longer in play because of the demise of Israel’s governmental system.

The first set of laws is known as the ceremonial laws. These entail regulations for priestly obligations (Leviticus 7), festivals (Leviticus 23), atonement (Leviticus 16,17), and sin sacrifices (Leviticus Chapters 1-6). These laws were all fulfilled in the life and sacrifice of Jesus Christ.

The next division is known as the civil division. These are mostly concerned with how to handle the Israelite’s civil disputes and how to run their government, including things such as, justice practices (Leviticus 24), how to conduct commerce (Leviticus 19:35), and how to deal with criminal activity (Leviticus 6). This division of the law ceased to exist when the government saw its demise.

The moral division of the laws are laws that will never change or cease to be practiced because they are defined by the very heart of God. This law has been written on our hearts. This is the very schoolmaster that brings us to Christ. This law will never cease to exist because it is God’s very nature, which does not change. It is the standard of right and wrong. Unlike what some may want to believe about Jesus’ stance on moral issues, it was actually Jesus who brought the Law to an even higher standard by not only affirming it, but also expounding upon it. He declared that it is not only the man who sleeps with a woman outside of marriage, but also he who looks at a woman with lust who is an adulterer. He proclaimed that if one hates someone, he is a murderer. Jesus was affirming the very moral law of God and the standard of conduct that He wants His people to meet. While the civil and ceremonial laws of the Israelites may have been negated and fulfilled, the very nature of God in His holiness will never change. God will always demand that we love our neighbor as ourselves, that He is first in our lives, and that we do not murder, steal or commit adultery.