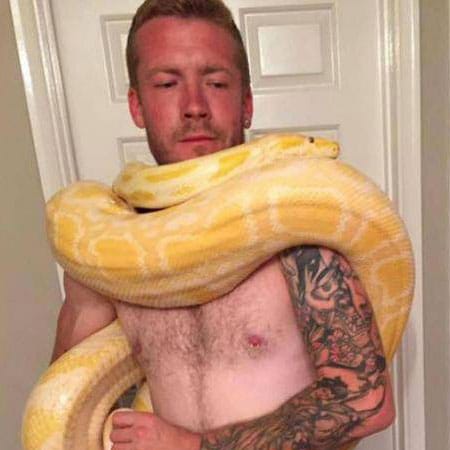 Last week I read a tragic news story about a man in Hampshire, Britain, who was strangled to death by his pet snake. 31-year-old Daniel Brandon was found dead by his mother, Babs, in his bedroom after she heard his body make a thudding sound as it fell to the floor in a heap. Daniel had been crushed by his 8-foot long African rock python, which lay coiled and hidden near Daniel’s body.

The coroner concluded: “[S]he was coiling around him … Brandon experienced a “moment of peace” while he was “communing” with the snake and it “went wrong.” While having a pet snake named Tiny is no sin, it sure is a vivid picture of “the deceitfulness of sin” in the lives of many professing Christians (Hebrews 3:12-14).

If we are not in God’s Word we are prone to deluding ourselves into thinking certain sins are “Tiny”. God’s Word, however, warns us that sin begins with tiny seeds – that can then grow into a huge harvest:

Millions of folks love to coil up with their favorite “pet sins,” and then justify them by pronouncing them “tiny”. They treat sin as trivial, until their sin swallows them whole and it’s too late.

When Tiny the snake was young, she lived up to her name. After all, baby African rock pythons are relatively small compared to how big they can get (they can grow up to twenty-feet long). Tiny grew bigger and stronger. This is how sin works. It starts out small. King David may have justified his sin with Bathsheba by initially thinking, “Hey, I am just looking,” but before he knew it, he was committing adultery and having her husband killed! While David eventually repented and was forgiven (Psalm 51), he also lost four children in consequence to his sin.

By all accounts, Daniel Brandon was considered an experienced and responsible snake owner, having had snakes and tarantulas for 16-years. His mother said, “She [Tiny] would get cross and hiss and pretend to strike. He [Brandon] would say: ‘For goodness’ sake, Tiny.’ At other times he would tell me: ‘Mum, you’ve got to come and look, she’s being really good today.’” (Source)

Sin can seem so tiny and manageable at first, but God’s word warns that it is “the little foxes, that spoil the vines” (Song of Solomon 2:15). Those who are enslaved to drugs and/or pornography will often state that it began with just a tiny amount. Most acknowledge that their enslavement to drugs began with a couple hits off of a gateway drug like marijuana. Those who are enslaved to pornography will typically admit it began with a few pictures. Sexual sin brings death to relationships as well as potential physical death via sexually transmitted diseases. Drugs and alcohol frequently kill relationships and often result in physical death via driving under the influence, violent acts, and overdoses.

Sin also leads to spiritual death. Eve reasoned that the forbidden fruit “was good for food and pleasing to the eye” (Genesis 3:6), then she gave some to her husband Adam. The result of this “tiny” sin was that the entire human race was plunged into spiritual and physical death. So much for the lie that “tiny” sins are without serious consequence! All of our sins are big and quite serious, because sin is transgression against our Thrice Holy God, the Creator of the universe! Joseph was able to avoid the seduction of Potiphar’s wife, because he refused to call sin “tiny,” and recognized sin as serious, “How then could I do this great evil and sin against God?” (Genesis 139:9b).

Like Eve, we sometimes ignore God’s Word and allow the serpent to coil up close to us and feed us his lies. God calls Satan “the serpent of old who is called the devil and Satan, who deceives the whole world” (Revelation 12:9b). One of the reasons we fail to take sin seriously is because we have allowed the world, like a snake, to squeeze us into its mold:

“Don’t let the world around you squeeze you into its own mould, but let God re-mould your minds from within, so that you may prove in practice that the plan of God for you is good, meets all his demands and moves towards the goal of true maturity” (Romans 12:2).

Another reason we fail to see the seriousness of sin is that many spiritual leaders refuse to warn God’s flock against it, and many don’t even blush over sin anymore:

“From the least to the greatest, all are greedy for gain; prophets and priests alike, all practice deceit. They dress the wound of my people as though it were not serious. ‘Peace, peace,’ they say, when there is no peace. Are they ashamed of their detestable conduct? No, they have no shame at all; they do not even know how to blush” (Jeremiah 6:13-15a).

The result of Judah’s viewing sin as a “tiny” matter was Divine judgment, as God allowed her enemies to swallow them up, “Like a serpent he has swallowed us and filled his stomach with our delicacies, and then has spewed us out” (Jeremiah 51:34b).

The bad news is that sin leads to death. The good news is that Jesus died for our sins on the cross, and if we confess and forsake them, we will obtain mercy:

“Whoever conceals his transgressions will not prosper, but he who confesses and forsakes them will obtain mercy” (Proverbs 28:13).

“If we confess our sins, He is faithful and righteous to forgive us our sins and to cleanse us from all unrighteousness” (1 John 1:9).