Did Joy Behar of ABC’s ‘The View’ Slam Oprah Winfrey as Mentally Ill? 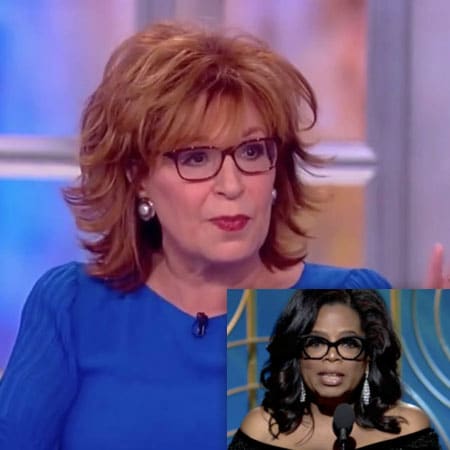 Oprah Winfrey recently told People Magazine that she is now seriously considering whether or not she will run against Donald Trump for President of the Untied States in 2020:

“I had people—wealthy, billionaires—calling me up and saying, ‘I can get you a billion dollars. I can run your campaign,’ Oprah divulges. “That many people saying something made me think, ‘Am I at least supposed to look at the question?’” (Source)

“I went into prayer,” she tells PEOPLE [in the magazine’s new cover story], “‘God, if you think I’m supposed to run, you gotta tell me, and it has to be so clear that not even I can miss it.’ And I haven’t gotten that.”

“It’s one thing to talk to Jesus, it’s another thing when Jesus talks to you. That’s called mental illness if I’m not correct. That’s hearing voices.”

Whoops! Wait a second … that attack was leveled against Vice President Pence, a professing Evangelical Christian, not Oprah Winfrey! Behar made that statement after Pence said that He communes with the Lord in prayer. We are still waiting for Behar, in the interest of consistency and fairness, to level the same charge against Oprah Winfrey. Still waiting … (crickets)!

The truth is that Behar’s denunciation of Pence as mentally ill, and her fawning over celebrities like Oprah Winfrey, reveals the utter hypocrisy and gross double standards found in the mainstream, liberal media. I made this point recently regarding her defense of Hillary Clinton, even though Clinton claims to receive directions from Eleanor Roosevelt, who has been dead for several decades (see: Joy Behar’s Hypocritical Attack on VP Pence’s Christian Faith)

Incredibly, we live in such a spirtually dark and confused time that if you pray to God, you are considered insane, but if you go around saying that you are taking orders from the spirits of the dead, you are celebrated. It is significant that like Hillary, Oprah Winfrey claims to hear the voices of spirits. Time Magazine reported about Oprah’s practice of calling forth spirits for empowerment and guidance:

“It is during these moments, usually while jogging the winding trails on her Indiana farm, that Winfrey becomes overwhelmed by the sense that old spirits are trying to get in touch with her. And it is during these moments that the woman who loves to talk stops dead in her tracks simply to listen.” (TIME, Canadian Edition, October 5, 1998, p.56)

God, in His Word, repeatedly warns against communion with familiar spirits:

“Give no regard to mediums and familiar spirits; do not seek after them, to be defiled by them: I am the LORD your God” (Leviticus 19:31).

TIME further reported that Winfrey actively seeks out such spirits, even going through elaborate ritualistic ceremonies and lighting candles to assist her:

“The spirits began visiting her a few years ago … While filming Beloved, she kept the slave inventory in her trailer on the set. She dedicated scenes to individual slaves by lighting a candle and praying aloud to them.” (Ibid)

Winfrey admits that she has actively sought to be possessed by such spirits, “I tried to empty myself and let the spirit of Sethe inhabit me.” (Ibid).

Oprah stated in her book, Journey to the Beloved:

“I ask God for grace, and the power of the spirits … Calling on you. Calling on you … I really believe I can call [Sethe] up. Her and so many others. I’m counting on them.” (Oprah Winfrey, Journey to the Beloved, Hyperion Books, 1998, p. 54)

However, if Oprah was truly following the biblical God of creation, she would have to heed His warning through the prophet Isaiah, when he warned against those who would seek the supposed spirits of the dead rather than Him:

“When men tell you to consult mediums and spiritists, who whisper and mutter, should not a people inquire of their God? Why consult the dead on behalf of the living” (Isaiah 8:19).

The Lord reveals that the demonic powers of darkness are able to appear as familiar spirits in their effort to deceive, and even Satan disguises himself into an angel of enlightenment.

The scriptures refer to evil spirits as “lying spirits” and “familiar spirits” because they sometimes transform themselves to appear as dead relatives in an effort to deceive their unwitting victims. Indeed, the Lord Jesus Christ called Satan the “father of lies” (John 8:44), and the apostle Paul warned that Satan is able to transform himself into an angel of light:

“For such men are false apostles, deceitful workmen, disguising themselves as apostles of Christ. And no wonder, for even Satan disguises himself as an angel of light. So it is no surprise if his servants, also, disguise themselves as servants of righteousness. Their end will correspond to their deeds” (2 Cor. 11:13-15).

God’s Word warns us to test the spirits:

“Beloved, do not believe every spirit, but test the spirits to see whether they are from God, for many false prophets have gone out into the world” (1 John 4:1).

We have a clue as to what kind of spirits are speaking to (and through) Oprah Winfrey, as she has used her massive broadcasting platform as a tool to potentially turn millions away from the historical Jesus of Holy Scripture. Winfrey argued with two women in her studio audience about whether or not Jesus is the only way to the Father. Rather than quoting from God’s Word, Winfrey quoted from Daniel Quinn, who has said that Jesus “has no special importance to me,” and promotes contacts with animistic spirits. (Experiencing Globalization: Religion in Contemporary Contexts, Anthem Press, 2014, p. 47)

Winfrey argued before millions in her audience:

“There’s this wonderful book called Ishmael by Daniel Quinn … one of the points it brings out is that one of the mistakes that human beings make is that there is only one way … there are millions of ways of being in the world. And there are many paths to what you call God. Your path might be something else, and when she gets there, she might call it ‘the light.’ But her loving and her kindness and her generosity, if it brings her to the same place that it brings you, it doesn’t matter whether she called it God along the way or not.” (Source)

When a woman sought to explain why Jesus is the only way to the Father, Winfrey, quite heated, declared, “There couldn’t possibly be just one way!”

Oprah was then contradicted by another woman who asked, “What about Jesus?” Winfrey retorted, “What about Jesus?” The woman responded to Winfrey, “You said there isn’t only one way. There is one way and only one way and that is through Jesus … you intellectualize it and you say there isn’t, but if you believe that, you’re all buying into the lie.” (Ibid)
Jesus has already settled the argument as to how many ways lead to God, declaring:

“I am the way, and the truth, and the life. No one comes to the Father except through me … I am the door. If anyone enters by me, he will be saved and will go in and out and find pasture. The thief comes only to steal and kill and destroy. I came that they may have life and have it abundantly” (John 10:1, 9-10).

“Truly, truly, I say to you, he who does not enter the sheepfold by the door but climbs in by another way, that man is a thief and a robber” (John 14:6).

It is hard to believe that it is simply a coincidence that Oprah Winfrey was thrust onto the world stage, duping countless Christians with her ‘Jesus talk’, all the while denying that Jesus is the only way to salvation. She has done this for several years now, all while being the premiere evangelist for the New Age Movement/New Spirituality. Even an article appearing in the far left online magazine, Slate, states that Oprah is the greatest evangelist of the New Age movement:

“Perhaps more than any other single American, she is responsible for giving national platforms and legitimacy to all sorts of magical thinking, from pseudoscientific to purely mystical, fantasies about extraterrestrials, paranormal experience, satanic cults, and more . Most of the best-known prophets and denominational leaders in the New Age realm owe their careers to Winfrey,” (Source)

Wise Christians will always test anything and everything that someone claims to be from God (1 Thessalonians 5:21), whether it is from Donald Trump, Mike Pence, or two new age spiritists like Hillary Clinton or Oprah Winfrey, both of whom may run for President of the United States in 2020. May God help us … in JESUS’ name!