How Can Music Be Demonically Inspired? 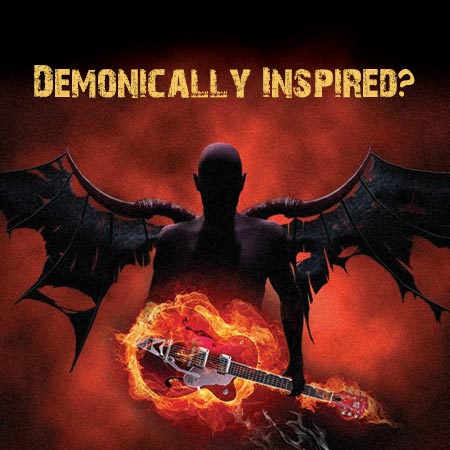 At some point in life it seems that everyone will hear the familiar phrase “Rock and roll is the devil’s music” or some variation of this infamous statement. Some of you may have laughed when you first heard this type of claim or perhaps still laugh when you hear it. I must admit I found it humorous when I first heard it as a teenager just getting into the music of Led Zeppelin, Black Sabbath and the likes of these groups. Once into these groups, I had to be honest with myself and as a result I found myself seriously pondering the possibly.

Well if you’re at the point of pondering the possibility or simply wanting to understand our position on the issue please continue reading.

I must begin by pointing out that we at Good Fight Ministries do not claim that all secular music is of Satan or, in other words, demonically inspired. What we are saying is that music can be demonically inspired – in fact we go on further to point out those artists that are clearly inspired demonically. However, we ask that you not just take our word for it, rather the “artists” own words, as in most cases they themselves admit to supernatural influences and then, of course, you have those that outright admit to satanic influence.

In order to understand our position one must realize that we use the bible as our ultimate source of truth. So if you are reading this and profess to be a Christian then we should, thus far, be in agreement as to what should be used to base truth on.

About Satan, the scriptures say,

Be sober, be vigilant; because your adversary the devil walks about like a roaring lion, seeking whom he may devour. –1 Peter 5:8

It’s no secret that Satan is out to deceive and destroy as many people as he can. But the question is, why would Satan use music? Well the following scriptures, pretty well sum up the answer.

Your pomp is brought down to Sheol, And the sound of your stringed instruments; The maggot is spread under you, And worms cover you. How you are fallen from heaven, O Lucifer, son of the morning! How you are cut down to the ground, You who weakened the nations! –Isaiah14:11-12

You were in Eden, the garden of God; Every precious stone was your covering: The sardius, topaz, and diamond, Beryl, onyx, and jasper, Sapphire, turquoise, and emerald with gold. The workmanship of your timbrels and pipes Was prepared for you on the day you were created. You were the anointed cherub who covers; I established you; You were on the holy mountain of God; You walked back and forth in the midst of fiery stones. You were perfect in your ways from the day you were created, Till iniquity was found in you. By the abundance of your trading You became filled with violence within, And you sinned; Therefore I cast you as a profane thing Out of the mountain of God; And I destroyed you, O covering cherub, From the midst of the fiery stones. –Ezekiel 28:13-16

The above scriptures clearly reveal to us some facts about Satan:

No doubt this clarifies the understanding as to why Satan would utilize music as an avenue in deceiving humans. Music is a natural ability of Satan. He’s a musical being and he has extensive experience having used it to worship God before his fall. It’s no wonder we find musician after musician influenced supernaturally when it comes to music. Our prayer is that people would realize the powerful influence Satan has over much of today’s music, as the scriptures above reveal.