Christians and Muslims Together? 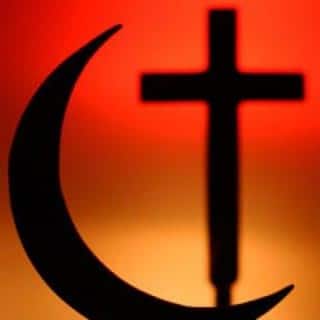 Are church leaders aligning themselves with Allah?

Has anyone noticed how hundreds of professing Christian leaders are compromising their faith by uniting with Muslims? Could it be that we are witnessing the formation of the prophesied one world religion under Antichrist? (Revelation 13:1-18) For example, Brian McLaren, a prominent Emerging Church leader, announced plans to celebrate the Islamic holiday, Ramadan, commemorating Muhammed’s reception of the Quran. On the fourth of July, when most Americans were celebrating the birth of our nation, Rick Warren, “America’s Pastor”, addressed the Islamic Society of North America; which, the Department of Justice categorized two years ago as a co-conspirator in financing a foreign terrorist group!

Another Emerging Church leader, Tony Campolo, a proponent of the so-called “evangelical left” claimed that “even if” Muslims “don’t convert, they are God’s people.” Campolo further declared, “A theology of mysticism provides some hope for common ground between Christianity and Islam.” (Tony Campolo, Speaking My Mind, page 149). Campolo, like McLaren and Warren, has a habit of compromising biblical truth to forge unholy alliances with sworn enemies of the Gospel. Campolo admitted, “Consequently, anyone who accuses me of violating the biblical message is correct!” (Tony Campolo, A Reasonable Faith, page 190)

Watch Joel Richardson explain the significance of Islam in last-days events in his 3-disc DVD set: “Islam and the End Times”

Even more chilling is the fact that over 300 prominent Christian leaders signed a letter issued by the Yale Center for Faith and Culture claiming that world peace is dependent on Muslims and Christians recognizing “Allah” and “Yahweh” as the same God. This letter, titled “Loving God and Neighbor Together,” was written in response to a signed document by 138 Muslim leaders titled “A Common Word Between Us and You.” McLaren, Warren, Robert Schuller and Bill Hybels were just several of the signatories to this outright betrayal of Christ!

Furthermore, both of these documents affirmed Muhammed as a “Prophet” of God and declared that world peace was dependant on mutual affirmation of the “unity” of God. Dr. William Lane Craig, a leading Christian apologist and philosopher, correctly stated that by signing this document, Rick Warren and others were, in effect, signing up to become Muslims! This is because an affirmation of Allah as God is a denial of the Triune God revealed in Holy Scripture. Moreover, the Quran denies that Jesus is the Son of God no less than nine times.

The Islamic “Common Word” document, in effect, calls on Christians to affirm the Islamic understanding of the unity of God as a precondition to achieving world peace. Part and parcel of implementing Shariah law around the world is the imposition of the worship of Allah worldwide:

“Believe in Allah and say not “Trinity.” Cease! It is better for you! Allah is only One God. Far is it removed from his transcendent majesty that he should have a son.” (Quran, Sura 4:171)

Incredibly, the very title of the Muslim document, “A Common Word Between Us and You,” is actually taken from a Quranic verse that calls for Christian’s (“people of the book”) to deny the Trinity (so-called “partners”) and to submit to Allah as the one true God:

“O People of the Book! Come to common terms as between us and you: That we worship none but Allah; that we associate no partners with him; that we erect not, from among ourselves, Lords and patrons other than Allah.” (Quran, Sura 3:64)

Could it be that this “Common Word” document is part of a master deception? Islamic scholars teach that Muslims may engage in “taqiyya,” which holds that Muslims may lie to unbelievers to defeat them. After all, the Quran states that “Allah is the best of schemers” (Quran 3:54), and Muhammad used deception when he signed a 10-year treaty with the Meccans while preparing for their defeat just two years later, executing many who had given him their misguided trust (Quran 9:3).

The “Common Word” document was issued from the Royal Aal al-Bayt Institute for Islamic Thought of Jordan. This same Institute has posted a number of fatwas condemning Christians to death for leaving Islam. So much for peace and tolerance! The Islamic concept of peace is tied to submission to Allah. However, God forewarned that the world would be saying “peace and safety” and given over to a “strong delusion” in the last days prior to Christ’s return (1 Thessalonians 5:3; 2 Thessalonians 2:9-12). This is very significant because the Bible states that the last days’ delusion will revolve around the spirit of the Antichrist, identified in Scripture as denial of the Father and the Son! (1 John 2:18-22; 4:1-4)