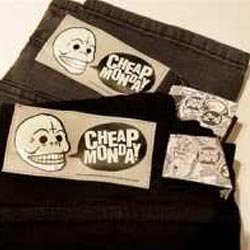 Sweden, already one of the most liberal and antichrist countries in the world, has taken another huge step away from God, the creator and toward death and darkness. Cheap Monday Jeans, which feature a satanic logo with an upside down cross emblazoned on the forehead of a skull, have already sold nearly a quarter of a million jeans as European youth are gobbling them up at about $50 a pop.

Logo designer Bjorn Atldax who says he hates the Christian faith and “I hate congregations,” says of the logo, “It is an active statement against Christianity,” and that Christianity is an “force of evil” in the world. Does Bjorn Atldax prefer the religion of Satanism, which utilizes inverted cross’ and skull’s like the ones he promotes on his logo?

A perusal of their website show other shirts with inverted crosses; the glorification of death; dark and suggestive texts such as “Over My Dead Body ”; references on shirts to the “Lord of the Flies” which is a biblical name for Satan (Beelzebub); a morbid mockery of Christ’s crucifixion; the number of the Antichrist (666) and a penchant for glorifying the strung out heroin look. There are also settings of scattered animal bones (some) suggesting ritual sacrifice. Now, these settings are not artistic drawings on shirts but taken from locations in the woods with bones from various animals. In one such setting I counted no less than six skulls. The skull used repeatedly is that of a goat, a favorite symbol in Satanism.

Is Satanism, which is the inversion of Christianity and promotes child sacrifice, child molestation and all sorts of other evil, now somehow a “force for good” Mr. Atldax? If anyone doubts that leading Satanists have promoted such wicked atrocities, all they have to do is look at the documentation we provide in our video, They Sold Their Soul’s for Rock and Roll. Bo Larsson, director of the Church of Sweden’s department of Education, Research and Culture stated that, “It is abundantly clear that this designer wants to create public opinion against the Christian faith…”

“One cannot just keep quiet about this,” said the Rev. Karl-Erik Nylund, a minister of St. Mary Magdalene Church in Stockholm, Sweden. “This is a deliberate provocation (against Christians) and I object to that.” He further lamented, “No one wants to provoke Jews or Muslims, but it’s totally OK to provoke Christians.”

No one can deny that while intolerance toward other religions is not politically correct anti-Christian bigotry is in vogue around the world including the Untied States. What would happen if Cheap Monday next issued a logo with a giant swastika with the phrase emblazoned upon it reading "Hail Hitler!" What if an anti Muslim symbol caricaturing Mohamed as a womanizer appeared on yet another Cheap Monday logo? Atldax, probably fearful for his life admits, “I am not considering any anti-Islamic work…” To be sure, there would be public outcry and the jeans would be taken off the shelves immediately.

Many liberals in the media, commerce and the arts, display hypocrisy and a forked tongue when they cry tolerance with one breath and in the next exhibit a diabolically inspired hatred for Jesus Christ and Christianity.

Orjan Andersson, the creator of the brand, stated, “I don’t believe in neither the devil nor God. I’m not interested in religion, I’m more interested in that the logo looks good.”

This is tantamount to Andersson using a swastika as his brand label and saying, "I don’t believe in Hitler or that the Holocaust ever happened. I’m not interested in Jews, I’m more interested in that the logo looks good." Andersson wants to sidestep the fact that his logo designer is trashing Christianity and promoting Satanism. He wants the logo to look good yet fails to make the connection that such a logo would only look good to those who hate the Christian faith or espouse Satanism, whether consciously or unconsciously. The ludicrous excuses would be hilarious if the subject matter and the bigotry against Christianity and the name of Jesus Christ was not so appalling and tragic.

Besides Sweden, Cheap Monday jeans are selling in Norway, Denmark, Britain, the Netherlands, France and Australia. Andersson states that he plans on introducing them to the youth in the United States of America next.

We have reached a time in world history wherein the world is uniting collectively against its creator. God’s Word warns of a time in which the “spirit of antichrist” which works though the “sons of disobedience” would create a climate conducive of the Antichrist’s appearance and 42 month reign. That climate is more alive than ever in the days in which we are living. Thankfully, the Antichrist’s reign will be terminated by the glorious, Second Coming of our great God and Savior, the Lord Jesus Christ!

Pray that the success that Satan is giving Cheap Monday jeans would be foiled so that those promoting the jeans might turn to the Lord and be saved before it is too late and they end up spending eternity in hell. Let us also pray that Cheap Monday jeans would have a short lifespan on the shelves of retailers before they corrupt more of our children in the USA and that they would be promptly removed from the jean pool.