Devil’s Due or Devil’s Rue? 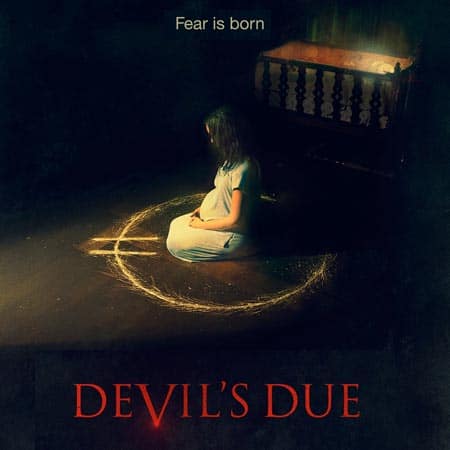 Devil’s Due (released January 17, 2014) is a 20th Century Fox movie that is considered by some to be a rip off of pedophile Roman Polanski’s 1968 movie about the birthing of the Antichrist entitled Rosemary’s Baby. The difference is that when Rosemary’s Baby debuted, very few people were identifying themselves as Satanists, and those who did were considered either mentally insane or utterly depraved. Today, Satanism is more acceptable, not because such choices are any less insane or depraved, but because society as a whole has been steadily desensitized, brainwashed and conditioned by popular culture. This mass conditioning process has taken place largely via the music industry and Hollywood. Movies like Devil’s Due are the devices that Satan uses to engage in mass evangelism.

The original 20th Century Fox poster (at right) promoting Devil’s Due, which is still being used to market the movie internationally, depicts a woman – who is pregnant with the Antichrist – being crucified on an upside down cross. The Motion Picture Association of America knew that many Americans would find the poster far too offensive and banned the poster in the United States.

Believe it or not, Devil’s Due is being used by 20th Century Fox to actively recruit the public into Satanism. On 20th Century Fox’s official website for the movie, Devilsduemovie.com/home.html, we find a link called "Convert" used as an invitation, in the form of a bribe, to become a Satanist and make a public confession of one’s new allegiance:

“The Devil’s Due. Convert Your Religion. Have you joined The Eternal Vigil? Convert your Facebook religion to Satanism and check your religious views below to become one of the converted and unlock an exclusive offering from @DevilsDueMovie.” (Source) 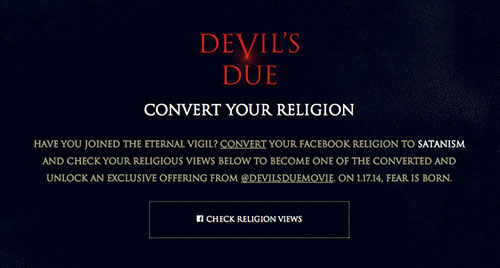 Essentially, the idea that 20th Century Fox is pushing is that if you convert to Satanism, and you change your Facebook status from “Christian,” or whatever it may be, to “Satanist,” you will be rewarded with a cool prize. But those who know the truth understand that anything the devil has to offer is a colossal rip off and not worth your eternal soul. Jesus Himself declared:

One man, who at first “hesitated” but then decided to sign his Facebook status over to “Satanist” in an effort “to find out exactly what this exclusive offering was,” admitted that he got a really bad deal when he received his prize. He said:

“I bit the bullet in an effort to find out exactly what this exclusive offering was. Unfortunately, it’s just a 16-second teaser clip for the film, which is little compensation for handing my soul over to Satan himself.” –John Squires, Fearnet.com January 7, 2014 (Source)

The stark reality is that all such deals with the devil are bad and are bound to get far worse. Those who have given themselves over to Satan eventually come to realize that God is a moral being who, as our Creator, demands our exclusive worship. They come to realize that, upon death, we must all give an account for our decisions on earth and that the consequences of those choices stretch into eternity:

“But it is appointed for men to die once, but after this the judgment” (Hebrews 9:27).

“For we must all appear before the judgment seat of Christ, so that each of us may receive what is due us for the things done while in the body, whether good or bad” (2 Corinthians 5:10).

The first Adam, along with Eve, took the devil’s offer and ended getting banished from paradise and returning to dust from whence he came (Genesis 3:1-19).

“Then Judas, His betrayer, seeing that He had been condemned, was remorseful and brought back the thirty pieces of silver to the chief priests and elders, 4 saying, “I have sinned by betraying innocent blood.” And they said, “What is that to us? You see to it!” Then he threw down the pieces of silver in the temple and departed, and went and hanged himself” (Matthew 27:3-5).

However, that is not the end of his story. Judas’ deal with the devil became even worse. Jesus called him “the one doomed to destruction” (John 17:12), and God reveals to us that he went “to his own place" of torment (Acts 1:25). Hell, far from being a big party where you can hang out with other evil people, is a place of outer darkness, weeping, gnashing of teeth, fire, torment and eternal isolation (Matthew 8:12; 13:41-42; Revelation 14:9-12)! Jesus said of Judas that it would have been better for him if he had never been born:

“The Son of Man indeed goes just as it is written of Him, but woe to that man by whom the Son of Man is betrayed! It would have been good for that man if he had not been born” (Matthew 26:24).

The truth is, it would be better for all those who reject God’s invitation to eternal life if they had never been born! Those at 20th Century Fox, who are leading others into Satanism will, like Judas, have their own special place in hell if they fail to repent and turn to Christ. Jesus warned:

"If anyone causes one of these little ones–those who believe in me–to stumble, it would be better for them if a large millstone were hung around their neck and they were thrown into the sea” (Mark 9:42).

If there were ever anyone who literally gained the whole world and then lost his soul, it would be the Antichrist, who will be worshipped by every nation, people and tongue (Revelation 13:1-16). The Antichrist will eternally regret dealing with the devil. Jesus revealed in the book of Revelation that Antichrist will be cast into the lake of fire, where Satan himself will be cast as well:

“And the devil, who deceived them, was thrown into the lake of burning sulfur, where the beast and the false prophet had been thrown. They will be tormented day and night for ever and ever” (Revelation 20:10).

Just a few verses later we read that all those whose names are not written in the Lamb’s (Jesus’) Book of Life will be cast into the lake of fire:

Is your name in the Book of Life? It is important for each of us to know that we all have to make a choice. Jesus warned that we all have to choose between following Himself or Satan; He simply left us no middle ground. Jesus said that even religious people who reject Him are of their “father the devil” (John 8:44). Jesus made it quite clear that we must make a choice when He declared, “Whoever is not with me is against me, and whoever does not gather with me scatters” (Matthew 12:30).

Dear friend, it is foolish to deal with the devil. In our eye-popping video, They Sold Their Souls for Rock n Roll, we reveal how so many of the most popular artists who ever lived have “sold their souls” to Satan and ended up dying young. Jesus said that hell was created “for the devil and his angels” (Matthew 25:41). Satan hates you and since he has lost his place in heaven his desire is to keep you from being saved through what Jesus did for you on the cross, when He died for your sins (2 Corinthians 4:4). Satan is angry about his eternal plight and wants to drag as many people as possible down to hell with him:

“The great dragon was hurled down—that ancient serpent called the devil, or Satan, who leads the whole world astray. He was hurled to the earth, and his angels with him… woe to the earth and the sea, because the devil has gone down to you! He is filled with fury, because he knows that his time is short” (Revelation 20:9, 12).

Our earnest hope and prayer is that those who are living a life of sin and rebellion against God would renounce Satan and the works of darkness and embrace the Lord Jesus Christ through faith and receive the free gift of eternal life (Romans 6:23). God declares in His Word that Jesus came to destroy the works of the devil in your life, “The reason the Son of God appeared was to destroy the works of the devil” (1 John 3:8). It doesn’t matter how bad you have been in the past or how high your sins have piled up to heaven, Jesus promised that if you sincerely come to Him in faith, He will not cast you away, but will give you the gift of eternal life:

“All those the Father gives me will come to me, and whoever comes to me I will never drive away” (John 6:37).

“For God so loved the world, that he gave his only Son, that whoever believes in him should not perish but have eternal life. For God did not send his Son into the world to condemn the world, but in order that the world might be saved through him. Whoever believes in him is not condemned, but whoever does not believe is condemned already, because he has not believed in the name of the only Son of God. And this is the judgment: the light has come into the world, and people loved the darkness rather than the light because their works were evil. For everyone who does wicked things hates the light and does not come to the light, lest his works should be exposed. But whoever does what is true comes to the light, so that it may be clearly seen that his works have been carried out in God” (John 3:16-21).

I want to encourage those reading this to pray for the salvation of those who made the film, Devil’s Due, and especially for those they are duping:

“You have heard that it was said, ‘You shall love your neighbor and hate your enemy.’ But I say to you, Love your enemies and pray for those who persecute you, so that you may be sons of your Father who is in heaven. For he makes his sun rise on the evil and on the good, and sends rain on the just and on the unjust” (Matthew 5:43-45).

Please share this article with others so they will not be “ignorant of Satan’s devices” (2 Corinthians 2:11) as we obey God’s command to “expose” the “works of darkness” (Ephesians 5:11) and share the gospel of Jesus Christ (Matthew 28:19-20). May the Lord greatly bless you as you press on to know Him and to make Him known!