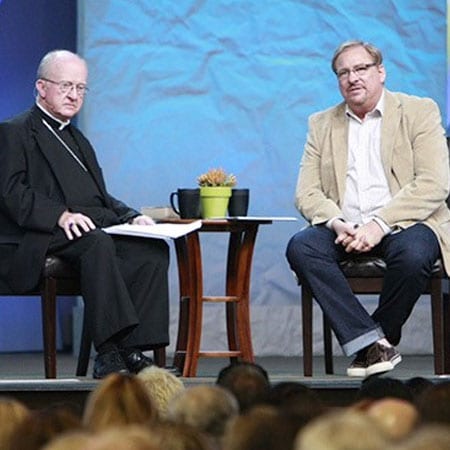 Rick Warren Rejects Protestantism and So Do a Majority of “Protestants”

If you weren’t certain as to whether or not Rick Warren has rejected protestantism in exchange for far-reaching ecumenism, you can be more certain of it now. And if the images of Warren holding prosperity teacher T.D. Jakes in his arms as they celebrated the arrival of Pope Francis on the White House lawn did not convince you of his compromise, his position should be getting clearer. Mr. Warren recently co-launched a major conference with Bishop Kevin Vann of Orange County, CA on the subject of mental health. They also sat down with the chancellor of the Orange County Diocese for an interview concerning their long-tenured friendship. As it was stated on the Catholic website Cruxnow.com:

“Ties between Evangelicals and Catholics in America come in all shapes and sizes, with one of the most striking flowering in Orange County, California, and a friendship and partnership between Bishop Kevin Vann and famed Evangelical pastor Rick Warren. Recently, Pia de Solenni, a lay Catholic theologian and chancellor of the Orange County diocese, spoke to both men about that friendship.” (Source)

Concerning the interview, Mr. Warren posted these words on his Twitter feed with a link attached to the aforementioned article: 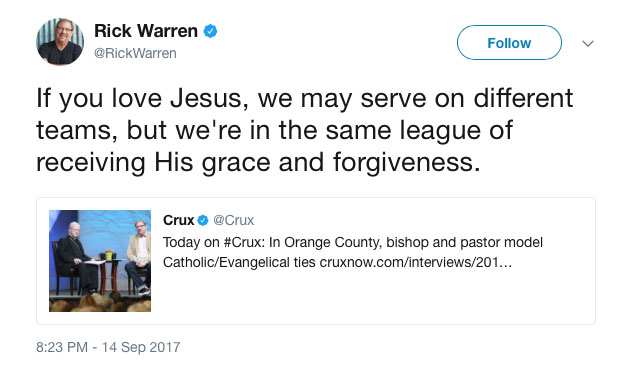 Interesting that he would phrase their relationship as being on different “teams” yet in the same league, when you consider that he recorded a video for Catholic News Service in which he gives a rebut for Christians who claim that Catholics worship Mary or have a problem with Catholics praying to saints. In the video he not only claims that Christians have more commonality in these Catholic practices than we realize, but Warren also stated at that time, “The most important thing is, if you love Jesus we are on the same team.” (Source)

The last question that was asked by the chancellor of the Orange County Diocese in the interview was about the greatest blessing of their friendship/partnership. Bishop Kevin Vann concluded that it was the harmony with which Mr. Warren’s church and the Catholic diocese has, as well as their prayers together. In this context, the Bishop spoke of all that can be accomplished if Evangelicals and Catholics come together more for prayer and ministry. To which Warren responded:

“Again, I completely agree with my friend. The Bible mentions the same three benefits that Kevin just did: Psalm 133:1 says ‘How good and pleasant it is when brothers live together in unity!’ Then Ecclesiastes 4:9 says ‘Two are better than one, because they get more done together.’ And finally, our Lord Jesus Christ told us in John 13:35 that our love for each other is the proof of our faith: ‘This is how all will know that you are my disciples, if you have love for one another.’” (Source)

But the same God that inspired the Psalms and Ecclesiastes asks, “Can two walk together, except they be agreed?” (Amos 3:3). How can we walk side-by-side with those who we Biblically disagree with? While Mr. Warren will repeatedly point to the fact that Christians and Catholics have much in common, what about those things we do not have in common? Are these issues that sparked the entire reformation no longer valid because we have commonality with the Trinity? Was that Paul’s attitude when he wrote his letter to the church of Galatia? I would argue that the church of Galatia in Paul’s time has far more in common with Protestant teaching than much of Catholic doctrine. But when they added something to the salvific plan of redemption, they were told “You have been severed from Christ, you who are seeking to be justified by law; you have fallen from grace.” (Galatians 5:4)

Do I believe that a Catholic can be saved? Of course I do. But I believe that a person who identifies as a Catholic is saved IN SPITE of Catholicism and not because of it. It is because of this belief that we need to be serious about how we lovingly share with those who are in error. One must ask, if Mr. Warren is the pastor of a congregation that considers itself part of a mainline protestant denomination (Baptist), then what on Earth is he protesting?

The term “protestant” was a term that was coined during the 16th century when Biblical Christianity reformed and protested the unbiblical doctrines of the Roman Catholic Church. The movement was started on October 31, 1517 on the doorsteps of All Saints’ Church in Wittenburg, Germany by Martin Luther, where he nailed his Ninety-five Theses to the door. This would eventually lead to what we now know as the reformed protestant movement. If you are a Bible believing Christian, you are currently in protest of the Catholic Church of Rome and the unbiblical stances they have taken when it comes to salvation, scripture, purgatory, the Papacy, and many other doctrines. Our protest against these things is not simply a stance against the Roman Catholic “church,” but a hardline belief that God’s word is our authority and we stand side by side with that which He has declared as “theopneustos” or “God breathed” (2 Timothy 3:16).

Mr. Warren is not the only person traveling down this road away from the Bible and back to Rome. A Pew Research study has concluded, “After 500 Years, Reformation-Era Divisions Have Lost Much of Their Potency.” They concluded this after conducting a survey across the United States of over 5,100 panelists. In their survey they discovered that less than half (46%) of the “protestants” they surveyed believe in the Biblical belief that man is saved by grace alone, through faith alone (Ephesians 2:8-9) and instead believe that good deeds and faith both play a part in our salvation. (Source)

What is interesting to note is that the same number of protestants (46%) who held to the belief that we are saved by grace alone through faith alone is the same as those who believe that the Bible provides all of the religious guidance that people need. It makes sense that those who believe that the Bible is our standard from which we are to refer for all doctrine would also believe that Ephesians 2:8-9 teaches that we are saved by grace and not by works.

While we do recognize the benefit of being edified by our pastors and teachers, where do we go to test their teachings to see if what they are saying is true? What is our standard? God’s word tells us that the Bereans were more noble than those of Thessalonica because they examined the teachings of Paul and Silas daily through the lenses of Scripture to see if they were true (Acts 17:11). God’s word is clear that it is noble to examine teachers by how their teachings line up with Scripture…even the teachings of the apostle Paul! Jesus cried out to His Father in His high priestly prayer, “Sanctify them in Thy truth, Thy word is truth!” (John 17:17).

To protest Roman Catholic doctrine does not mean we hate Catholics. What it means is that we take a stand with God’s word and declare it as divinely breathed on to paper. It should give us a heart that makes us yearn for our Catholic friends to be saved! How much can you yearn for someone as you pat them on the back while they are being deceived? While Catholics may have much more in common with our faith than many of the other cults, the fact remains that where they veer off, and when they veer off, we must protest. As Charles Spurgeon once brilliantly said, “Discernment is not knowing the difference between right and wrong. It is knowing the difference between right and almost right.”