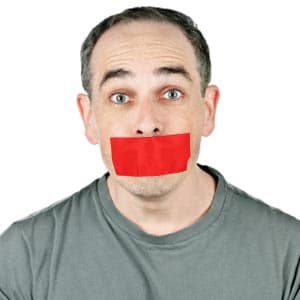 Discernment ministries such as Good Fight Ministries often hear objections because we tend to deal with matters in pop culture which are contrary to God’s holy Word; we expose them and shine a light on them (Ephesians 5:11). Warren B. Smith, a veteran author and speaker on spiritual deception, helps us to answer these objections using the Bible as our guide.

By Warren B. Smith

“Woe unto them that call evil good, and good evil; that put darkness for light, and light for darkness; that put bitter for sweet, and sweet for bitter!” —Isaiah 5:20

In the first book of Kings, God comes to Solomon in a dream and tells him he can ask for anything that he wants:

“In Gibeon the Lord appeared to Solomon in a dream by night: and God said, Ask what I shall give thee.” —1 Kings 3:5

Solomon asks for discernment: He wants to be able to discern the difference between what is good and bad—between good and evil. He answers God:

“Give therefore thy servant an understanding heart to judge thy people, that I may discern between good and bad: for who is able to judge this thy so great a people?” —1 Kings 3:9

God is pleased with Solomon’s request, noting that he asked solely for discernment rather than selfish things for himself:

While our Adversary furiously attempts to undermine the importance of discernment by ridiculing it, we are not ignorant of his devices (2 Corinthians 2:11).

SOME OF THE MANY ACCUSATIONS MADE BY DISCERNMENT DETRACTORS

1) If you hate deception and evil and try to expose it, you are a hater—but the Bible says:

“And have no fellowship with the unfruitful works of darkness, but rather reprove [expose] them. For it is a shame even to speak of those things which are done of them in secret. But all things that are reproved [exposed] are made manifest by the light: for whatsoever doth make manifest is light.”  —Ephesians 5:11-13

2) If you contend for the faith, you are contentious—but the Bible says:

“Beloved, when I gave all diligence to write unto you of the common salvation, it was needful for me to write unto you, and exhort you that ye should earnestly contend for the faith which was once delivered unto the saints.” —Jude 1:3

3) If you sound an alarm, you are an alarmist—but the Bible says:

“Blow ye the trumpet in Zion, and sound an alarm in my holy mountain: let all the inhabitants of the land tremble: for the day of the Lord cometh, for it is nigh at hand;” —Joel 2:1

“If when he seeth the sword come upon the land, he blow the trumpet, and warn the people;” —Ezekiel 33:3

“I write not these things to shame you, but as my beloved sons I warn you.” —1 Corinthians 4:14

4) If you try to expose heresy, you are a heresy hunter—but the Bible says:

“But there were false prophets also among the people, even as there shall be false teachers among you, who privily shall bring in damnable heresies…” —2 Peter 2:1

“For there must be also heresies among you, that they which are approved may be made manifest among you.” —1 Corinthians 11:19

“And have no fellowship with the unfruitful works of darkness, but rather reprove them. For it is a shame even to speak of those things which are done of them in secret. But all things that are reproved are made manifest by the light: for whatsoever doth make manifest is light. ” —Ephesians 5:11-13

5) If you critique false teachings, you have a critical spirit—but the Bible says:

“And have no fellowship with the unfruitful works of darkness, but rather reprove [expose] them.” —Ephesians 5:11

6) If you name the names of false teachers, you are a name caller—but the Bible names names:

“Alexander the coppersmith did me much evil: the Lord reward him according to his works:” —2 Timothy 4:14

“This thou knowest, that all they which are in Asia be turned away from me; of whom are Phygellus and Hermogenes.” —2 Timothy 1:15

“And their word will eat as doth a canker: of whom is Hymenaeus and Philetus; Who concerning the truth have erred…” —2 Timothy 2:17-18

7) If you exercise righteous judgement, you are considered judgmental—but the Bible says:

“Judge not according to the appearance, but judge righteous judgment.” —John 7:24

8) If you separate yourself from the things of the world, you are a separatist and into separation—but the Bible says:

“Wherefore come out from among them, and be ye separate, saith the Lord, and touch not the unclean thing; and I will receive you.” —2 Corinthians 6:17

9) If you think the way is narrow, you are narrow-minded—but the Bible says:

“Because strait is the gate, and narrow is the way, which leadeth unto life, and few there be that find it.” —Matthew 7:14

10) If you think Jesus is the only way, you are exclusivistic and way off—but the Bible says:

11) If you mark them which cause divisions contrary to doctrine, you are divisive—but the Bible says:

“Now I beseech you, brethren, mark them which cause divisions and offences contrary to the doctrine which ye have learned; and avoid them.” —Romans 16-17

12) If you warn about deception, you are a deceiver—but the Bible says:

“Woe unto them that call evil good, and good evil; that put darkness for light, and light for darkness; that put bitter for sweet, and sweet for bitter!” —Isaiah 5:20

“Now the next day, that followed the day of the preparation, the chief priests and Pharisees came together unto Pilate, Saying, Sir, we remember that that deceiver said, while he was yet alive, After three days I will rise again.” —Matthew 27:62-63

13) If you warn about the wild grapes, you are sour grapes—but the Bible says:

“Now will I sing to my wellbeloved a song of my beloved touching his vineyard. My wellbeloved hath a vineyard in a very fruitful hill: And he fenced it, and gathered out the stones thereof, and planted it with the choicest vine, and built a tower in the midst of it, and also made a winepress therein: and he looked that it should bring forth grapes, and it brought forth wild grapes. And now, O inhabitants of Jerusalem, and men of Judah, judge, I pray you, betwixt me and my vineyard. What could have been done more to my vineyard, that I have not done in it? wherefore, when I looked that it should bring forth grapes, brought it forth wild grapes? “ —Isaiah 5:1-4

14) If you believe Jesus’ prophetic words in the Book of Revelation that the battle of Armageddon will happen one day, then you are a “Doomsday Deceiver”—but the Bible says:

“And he gathered them together into a place called in the Hebrew tongue Armageddon.” —Revelation 16:16

“Blessed is he that readeth, and they that hear the words of this prophecy, and keep those things which are written therein: for the time is at hand.” —Revelation 1:3

15) If you say “no” to the false teachings of the world, you are a “naysayer”—but the Bible warns:

“But let your communication be, Yea, yea; Nay, nay: for whatsoever is more than these cometh of evil.” —Matthew 5:37

“It is enough for the disciple that he be as his master, and the servant as his lord. If they have called the master of the house Beelzebub, how much more shall they call them of his household?” —Matthew 10:25

“Blessed are ye, when men shall revile you, and persecute you, and shall say all manner of evil against you falsely, for my sake. Rejoice, and be exceeding glad: for great is your reward in heaven:” —Matthew 5:11-12

“Yea, and all that will live godly in Christ Jesus shall suffer persecution. But evil men and seducers shall wax worse and worse, deceiving, and being deceived. But continue thou in the things which thou hast learned and hast been assured of, knowing of whom thou hast learned them; And that from a child thou hast known the holy scriptures, which are able to make thee wise unto salvation through faith which is in Christ Jesus. All scripture is given by inspiration of God, and is profitable for doctrine, for reproof, for correction, for instruction in righteousness: That the man of God may be perfect, thoroughly furnished unto all good works. ” —2 Timothy 3:12-17

Warren B. Smith (B.A. University of Pennsylvania; M.S.W. Tulane University) is a veteran who worked at the White House Communications Agency. He later became a community social worker, serving as a program coordinator for people with special needs, directing several homeless programs, and working as a Hospice social worker in New Orleans and California. After leaving the New Age movement and becoming a Christian, he began writing extensively on the subject of spiritual deception. He has written six books, numerous booklets, and has spoken on radio, television, and at seminars and conferences for the last 25 years. For more information, visit www.warrenbsmith.com