Eugene Peterson and His Mixed “Message” 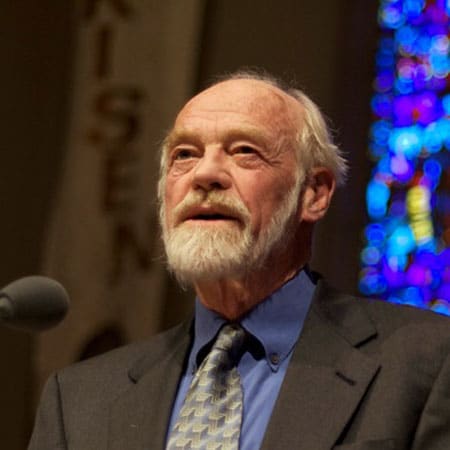 As Good Fight Ministries reported on our Facebook Page:

Eugene Peterson, the architect behind “The Message” translation (if you would like to call it that), has come out in support of homosexuality. In a recent interview with Jonathan Merritt of Religion News Service, Peterson made the following statement:

“I wouldn’t have said this 20 years ago, but now I know a lot of people who are gay and lesbian, and they seem to have as good a spiritual life as I do.”

He went on to say that “I think that kind of debate about lesbians and gays might be over”.

If Mr. Peterson truly believed in the authority of Scripture he would realize that the debate is over. What God has proclaimed to be sin, is sin and that is that (1 Corinthians 6:9-10, Romans 1:26-28).

But after receiving backlash from many of those in the Christian community, a retraction was given in which Mr. Peterson says quite the opposite. In a Christianity Today article titled, “Actually, Eugene Peterson Does Not Support Same-Sex Marriage”, Peterson stated:

“Recently a reporter asked me whether my personal opinions about homosexuality and same-sex marriage have changed over the years. I presume I was asked this question because of my former career as a pastor in the Presbyterian Church (USA), which recently affirmed homosexuality and began allowing its clergy to perform same-sex weddings. Having retired from the pastorate more than 25 years ago, I acknowledged to the reporter that I “haven’t had a lot of experience with it.

The Christianity Today article went a step further and stated:

“RNS columnist Jonathan Merritt had asked Peterson, “If you were pastoring today and a gay couple in your church who were Christians of good faith asked you to perform their same-sex wedding ceremony, is that something you would do?” Peterson had responded with one word: yes.” (Source)

While the question as to whether or not Mr. Peterson would perform a same-sex marriage did get a one word answer, it was the much longer response he gave on July 12, 2017 that gave greater clarity to his position:

Interviewer: You are Presbyterian, and your denomination has really been grappling with some of the hot-button issues. I think particularly of homosexuality and same-sex marriage. Has your view on that changed over the years?

Peterson: I haven’t had a lot of experience with it. But I have been in churches when I was an associate pastor where there were several women who were lesbians. They didn’t make a big deal about it. I’d go and visit them and it never came up for them. They just assumed that they were as Christian as everybody else in the church.

In my own congregation — when I left, we had about 500 people — I don’t think we ever really made a big deal out of it. When I left, the minister of music left. She’d been there ever since I had been there. There we were, looking for a new minister of music. One of the young people that had grown up under my pastorship, he was a high school teacher and a musician. When he found out about the opening, he showed up in church one day and stood up and said, “I’d like to apply for the job of music director here, and I’m gay.” We didn’t have any gay people in the whole congregation. Well, some of them weren’t openly gay. But I was so pleased with the congregation. Nobody made any questions about it. And he was a really good musician.

I wouldn’t have said this 20 years ago, but now I know a lot of people who are gay and lesbian and they seem to have as good a spiritual life as I do. I think that kind of debate about lesbians and gays might be over. People who disapprove of it, they’ll probably just go to another church. So we’re in a transition and I think it’s a transition for the best, for the good. I don’t think it’s something that you can parade, but it’s not a right or wrong thing as far as I’m concerned. (Source)

When looking at his statement in context, it does not appear that he was “put on the spot” (as he claimed in his retraction) and simply gave a “one word answer,” but that one word answer was a follow up to his clear support of homosexuality. One can only suspect why Mr. Peterson has come out with this retraction, but as you can read for yourself, it does not entirely answer what Mr. Peterson meant about homosexuals living a spiritual life as good as his, why he hired a homosexual to lead music at his church, or whether or not he believes this is a “right or wrong” issue. But I do believe his retraction does give us some insight as to where his problem may lie when it comes to this issue:

“That said, I would still love such a couple as their pastor. They’d be welcome at my table, along with everybody else.” (Source)

“I wrote to you in my letter not to associate with sexually immoral people—not at all meaning the sexually immoral of this world, or the greedy and swindlers, or idolaters, since then you would need to go out of the world. But now I am writing to you not to associate with anyone who bears the name of brother if he is guilty of sexual immorality or greed, or is an idolater, reviler, drunkard, or swindler—not even to eat with such a one. For what have I to do with judging outsiders? Is it not those inside the church whom you are to judge? God judges those outside. “Purge the evil person from among you.” 1 Corinthians 5:9-13

It is quite interesting that the very words that Mr. Peterson used in his retraction were, “They’d be welcome at my table,” when God has made it clear that they should not be. Take note as to what the church’s duty is for anyone who “bears the name of a brother” and practices wickedness. “But now I am writing to you not to associate with anyone who bears the name of brother if he is guilty of sexual immorality or greed, or is an idolater, reviler, drunkard, or swindler—not even to eat with such a one” (vs. 11). If Mr. Peterson’s congregants were under his pastoral leadership and practicing their homosexual acts as a “couple,” the only Biblical reaction would be to call them to repentance or expel them. Should the homosexual and adulterer alike be prayed for? Certainly! Should they be ministered to and loved? Most assuredly! Should we pat them on the back and welcome them to our table as if they are brethren? Not unless we want their blood on our hands!

In Matthew 18:15-20, Jesus is very clear as to how to deal with a person at your fellowship who is practicing wickedness. We are called to win our brother by sharing with them their need for repentance. While the unrepentant are to be expelled and dealt with as a non-believer, in the same context we are told to forgive those who have wronged us “seventy times seven” (Matthew 18:21-22). Our ultimate goal is always reconciliation, but we also need to recognize sin for the leaven that it is. God cares so much about His church that He wants it to be unstained from the outside world. He is coming for a pure and chaste bride, not one that is tossed about by every wind of doctrine. Let us stand firm until the end and hold fast to truth of God’s word!