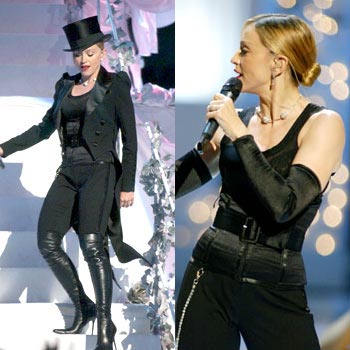 While the news media did report extensively on Madonna kissing Britney Spears and Christina Aguilera at the 2003 MTV VMA Awards, there was something quite significant about the event that went largely unreported.

The MTV event was in fact a mock lesbian wedding. There was a "wedding chapel" in the set. Madonna was dressed as the butch lesbian, as she was in a tux with a top hat, and Britney and Christina were in the role as the more feminine lesbians. As Madonna stood at the top of a staircase waiting to walk down the isle to Britney and Christina, the traditional wedding march began. It was after they met at the end of the isle and danced that they kissed one another to bring a climax to the wedding. Together they sang at the end of the song that they are tired of the "concept of right and wrong." This is evidence enough that there is a serious agenda afoot to destroy the God-designed institution of marriage and exchange it with that which is contrary to nature and the Word of God! 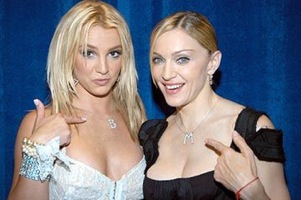 Bob Pittman, Founder and former President of MTV, made a startling admission. Pittman outlined a simple two-point plan whereby MTV would be able to accomplish its objective in the ownership of your children. The plan was basic, (1) "Get their emotions going". (2) "Make them forget their logic". Pittman then calculated, MTV will "own" our children. This is no more than a basic subversive brain washing technique. Pittman had the brazen audacity to admit:

"The strongest appeal you can make is emotionally. If you can get their emotions going, make them forget their logic, you’ve got them. AT MTV, WE DON’T SHOOT FOR THE 14-YEAR OLDS, WE OWN THEM". (“MTV is Rock Around the Clock,” Philadelphia Inquirer, Nov. 3, 1982)

MTV has come a long way in leading millions of impressionable youth down the greased pole to hell. 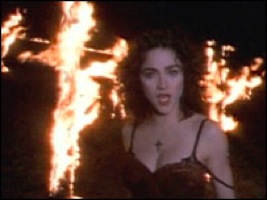 Satan and the legion of demonic beings that do his bidding have used MTV and countless pop stars to promote musical terrorism. Though it is heart breaking, it is par for the course to see Madonna engaged in a lesbian act with Britney Spears and Christina Aguilera on the MTV music awards.

We would be foolish to believe that the promotion of lesbianism by Madonna, Britney Spears and Christina Aguilera on MTV is nothing less than part and parcel of a subversive plan to erode what is left of the lingering vestiges of morality in our nation.

If Pepsi gave millions of dollars to Madonna to drink Pepsi knowing that they would have a huge influence on the masses to buy their product, what kind effect can we expect upon the youth of our nation when they view their top icons promoting lesbianism? Sadly, Madonna kissed both Britney and Christina with far more passion than she drank her Pepsi.

Why would Satan go to such lengths to promote homosexuality among our youth?

The answer is simple. God created sex to be enjoyed in the confines of marriage between a man and a woman. Homosexuality is defiant against God’s natural law. Satan knows that in promoting homosexuality he is able to further perpetuate mankind’s increasing rebellion against God. Moreover, he is more effectively able to eternally damn unwitting souls. God’s word warns that homosexuals will not inherit the kingdom of God (1 Corinthians 6:9-11) but will be sentenced to the lake of fire (Revelation 21:8).

Thank God there is hope for those who turn from their rebellion against God to Jesus Christ who died and rose to save them from their sins.

Dear visitor, your life is precious to God and to us. It doesn’t matter how bad you have been, God loves you and laid His life down on the cross to suffer the penalty you and I deserve. Your life will soon end and you will stand before God to be sentenced to heaven or hell for eternity. Choose life and turn from your sins to Christ. Jesus said: