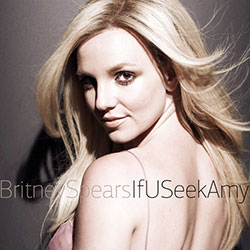 Oops she did it again! After Britney Spears spent time working herself back into the good graces of unsuspecting parents who had grown weary of her descent into darkness, and decided they weren’t going to let her take their children down with her, she’s at it all over again! Like a snake that has recoiled and regained its equilibrium after striking its victim only to strike again, Britney has served up more toxic venom for millions of unsuspecting parents and children. Allmusic described her new song, “If U Seek Amy,” from her latest album Circus, as an “exercise in crass commercial carnality”, a “trashy stomper” and “nakedly vulgar”. Allmusic further acknowledged that Britney, “never was this explicit” before, and that her new single, “If U Seek Amy,” is a “Katy Perry-styled” song. Katy Perry, whose own suggestive song, “I Kissed a Girl,” incidentally is believed to promote lesbianism among young girls.

In her newest hit, “If U Seek Amy,” Spears employs a cheap play on words when singing the part of the chorus that repeats the title of her track. When she sings “If U Seek Amy” she sounds as if she is deliberately and emphatically spelling out the “F” word. Thus phonetically, “If U Seek Amy” becomes “If=F… You=U… see=C… kA=A… my=Me. Tragically, when singing those words with the rest of the line, she is literally singing, “All of the boys and all of the girls are begging to F—U—C—K-me.” What she is doing is telling the potentially millions of children who will listen to the song, that “all” of the boys and girls are begging to have sex with her, whether it is heterosexual or lesbian. Add to this the fact that multitudes of little children are going around singing those words and applying it to themselves!

This is another sad case of the music industry playing a major role in dragging God’s beautiful gift of sex into the gutter and contributing to the downfall of morals in America and throughout the world. How many children have been destroyed by Britney Spears, Madonna, and hundreds of other artists, who often care more about money, fame and power than they do about polluting the hearts and minds of children?

In reference to Britney’s new single, USA Today spoke of the “downward spiral of celebrities”. Sadly they are bringing a lot of naive children down with them as Entertainment Weekly predicted the song will “be a middle-school sensation”.

The blame, though, does not belong to Britney Spears and the music industry alone, but the greatest blame really belongs to us! One of the biggest reasons children get caught up in this kind of music, and end up in a Britney Spears-like free fall, is because parents aren’t parenting anymore! Parents fail to be the stewards of the children whom God has entrusted to them and will be judged accordingly. They fail to take the time out that is required to examine what their children are watching or listening to. They fail to give moral guidelines and then follow up by doing the best to lovingly enforce them. Rolling Stone Magazine, which has done plenty in corrupting children, quoted shocked parents saying things like:

“I was astonished and totally taken back when I heard my 5 and 7 year old kids walking around the house singing ‘F-U-C-K’… When I asked them what it was, they told me it was Britney Spears. I was horrified.” – Rolling Stone, December 5, 2008

How many of us who are parents are shocked at what our children are listening to or watching? The reality is that we live in an evil world with the forces of darkness arrayed against our families (Ephesians 6:10-18) and seeking our destruction (1 Peter 5:8). We as parents are the ones who need to wake up. We need to take the responsibility of raising our children to know God and His word. We dare not allow our children to meander aimlessly through the spiritual minefields that threaten to blow their innocent lives into little pieces.

Britney Spears is considered tame by much of the fallen world’s standards, however studies have demonstrated that those who listen to secular pop music are far more inclined to engage in sexual sin than those who do not. God’s word warns us “avoid worldly and empty chatter, for it will lead to further ungodliness.” (2 Timothy 2:16). If you are a young person you need to know that God wants you to realize that He not only loves you but gives you Godly counsel in His word so that you will have a life that pleases Him and be truly blessed! He also wants you to know that He is holy and righteous and therefore must judge sin and evil.

If you are a parent, you need to know that if we allow the worldly and godless chatter of Britney Spears and other pop icons to freely pour like a sewer pipe into the hearts of our children the net effect will eventually be garbage in and garbage out!

Even worse than the legendary sirens of old, who targeted sailors with their seductive songs only to dash their ships on the rocks and lead their souls down to Hades, Britney’s seductive songs of destruction are unconscionably directed at children. Solomon, who was the wisest king of his day, wrote the book of Proverbs under the inspiration of God to instruct his children. He did this so they could be mature in the wisdom of God and wise to the wicked ways of the world. Solomon spent a considerable amount of time warning his children not to fall in with a seductress and further warned his son that her ways would lead him to destruction (Proverbs Chapters 4-7, etc). He warned his son not to be deceived by the flaunting of her eyes or the seductive words that flowed like oil from her mouth. He warned his son that if he were to fall into her trap that he would be like an ox led to the slaughter and end up being destroyed! With one in every four teenagers acquiring at least one sexually transmitted disease today, including HIV/AIDS, what caring parent would withhold such godly counsel from his or her child?

I believe that we need to ask God for forgiveness in the areas where we have come short in protecting and teaching our children. Let us ask God to give us the love, courage and patience needed to instruct our children in His righteousness. If we are parents, let us determine in our hearts to be examples and not hypocrites, to show our children the love and life of Jesus Christ in our daily walks with Him. Let us keep our guard up and not allow Britney Spears, Madonna, Marilyn Manson or anyone else to raise our children for us. That is a job God has given to us! Confessed Satanist, Marilyn Manson, actually gave some great parenting advice when he said, “Raise your kids better or I’ll be raising them for you.”