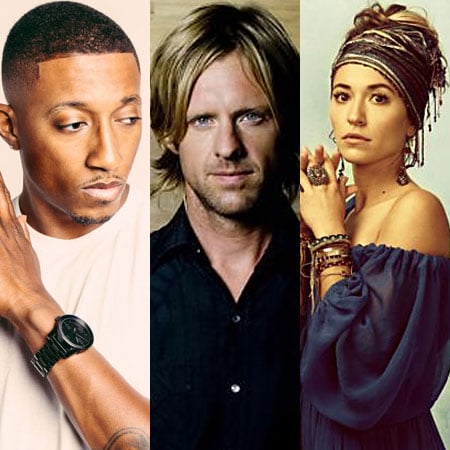 “I am a Christian. I am a rapper. But Christian is my faith not my genre.” -Lecrae

“I feel like those labels get put on you by other people, I was reading articles, I read them here in there, and one of them said Christian artist and the other ones said just artist. But I think part of me is just an artist because it encompasses everything. That’s kind of how I see myself.” -Lauren Daigle

“None of these songs has been born again, and to that end there is no such thing as Christian music.” -John Foreman (Switchfoot)

Is this a good argument?

The first thing that we should do is see what God’s word has to say about the word “Christian”. Many would be surprised to learn that the term “Christian” (Χριστιανός, Christianos) is only used 3 times in all of the New Testament. Twice in the book of Acts and once in 1 Peter (it is possibly also referenced in James 2:7). We are told in Acts 11:26 that Christians were first given this name in Antioch. 1 Peter 4:16 tells those who suffer under this name to glorify God in it. And the only other time that we see it used is by King Agrippa during the testimony of Paul, when Agrippa mockingly asked Paul, “In a short time you will persuade me to become a Christian” (Acts 26:28), to which Paul replied:

“I would wish to God, that whether in a short or long time, not only you, but also all who hear me this day, might become such as I am, except for these chains” (Ibid.)

While Paul wished for Agrippa (and all those who heard him before the court) to become a Christian, he hoped that they would not need the chains to go with them. One very interesting thing about this exchange is something that Paul says earlier in his testimony. When Paul was brought before the court, he did not recant or ask not to be called a Christian. He shared his testimony and was declared “out of [his] mind” (Acts 26:24), to which Paul replied:

“I am not out of my mind, most excellent Festus, but I utter words of sober truth. For the king knows about these matters, and I speak to him also with confidence, since I am persuaded that none of these things escape his notice; for this has not been done in a corner” (Acts 26:25-26)

He did not practice these things in a corner, he did them in public. It was his public actions and testimony before Agrippa that opened the door for the gospel; not recanting his declaration, but glorifying God in that name, as the apostle Peter tells us to do in 1 Peter 4:16.

Scripturally speaking, the term Christian is always given by those of the world to believers who follow Christ publicly. In every instance of the word, it is the conduct of Christians which provides those outside of Christendom to label them as such. It is not a name given to believers by their fellow brethren, but a name given to them because they follow the Christ who saved them. This insult should be one that is worn as a badge of honor to our King. If a professing believer does not want to be labeled by the outside world as “Christian”, one has to sincerely ask themselves why?

In Grammy-award winner Lecrae’s case, it honestly seems that it is because he has become less bold than he was in the beginning of his career. This isn’t an opinion based on a lack of evidence, but based on evidence provided by his own website. As it has been pointed out:

A controversy has been brewing in Christian hip-hop (CHH) for ten years.
At the center of this controversy is rapper Lecrae and the record label he co-founded, Reach Records. The mission of Reach is “changing the way people see the world.” Their artists and fans rally around Romans 1:16, being “unashamed” of the gospel. The Reach brand was built on music that shared the gospel. Listen to Lecrae’s 2006 album After the Music Stops. If you get through the first song without realizing Lecrae is a Christian, the second track, “Jesus Muzik”, makes it clear.
In the hook, Lecrae boasts he’s “riding with my top down listening to this Jesus music.” He’s proclaiming Jesus as king.
When Lecrae released chart-topping Gravity in 2012, fans started to notice a shift in his lyrics and self-description. Big K.R.I.T., a secular rapper with a hit song titled “Country Sh*t,” was featured on the album. While the gospel still permeated Lecrae’s songs, it was less overt.
Then Reach changed their “About Us” page, removing Romans 1:16 and any mention of Jesus Christ. They retained the mission “to change the way people see the world” and the story of Reach’s founding.
(Source)

is now replying to those asking in tweets if he is a Christian rapper: 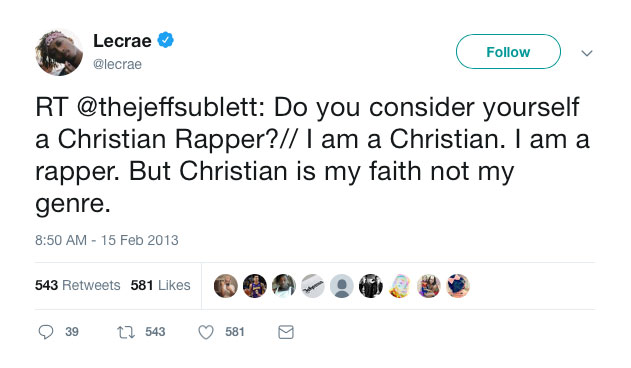 How does one go from labeling their entire movement based on a verse that says “I am not ashamed of the gospel…” to taking the references down from their website and denying that the music they are creating should fall under the genre of “Christian”? While we do not want to judge one’s heart, we have to sincerely ask: why the shift? Has Lecrae turned his back on Christ or is he attempting to be less overt so that he may be able to reach a bigger audience?

Some may believe that if they are too bold, they will lose some of the appeal to the outside world and they may not be able to reach them because of it. But is that really a scriptural view of reaching the culture? In a teaching by Voddie Baucham titled, “Adapting to the Culture … Or Not”, he speaks directly about the Christian musician and some of the ways they attempt to affect the culture:

“The classic example of this is the Christian musician, who wants to go and do music so that through becoming the most popular music star of our day, he or she can then have a platform for the gospel. It’s a classic bait and switch. I will be all that the world desires so that I can become incredibly popular in the world and then once I am enthroned and the world is worshipping me, I will flip the script and tell them about Jesus. And of course then, the world will be saved. Is that what we see in the new testament? Is that what we see from the apostle Paul? I would argue that it is not.” (Source)

Some musicians have complained that labeling their music “Christian” then implies that a song can be “saved” or “born again” and therefor, since a song cannot be, the song cannot be Christian.

As John Foreman of Switchfoot once stated:

“None of these songs has been born again, and to that end there is no such thing as Christian music.” (Source)

But the problem here is that nobody on earth believes such a thing. Nobody believes that a song can be saved. If it is labeled “Christian” it’s because it is glorifying God in a manner that is fitting with Scripture. Just as the outside world labeled early followers of Jesus “Christians”, because their outside behavior reflected that of their Christ, so we also should label music that reflects Jesus as Christian.

Interestingly enough, in the same line of questioning, Mr. Foreman pointed out something that was indeed a fact:

“The view that a pastor is more ‘Christian’ than a girls volleyball coach is flawed and heretical.” (Ibid.)

This is true. One is not more “saved” because they happen to be gifted in the manner of teaching and shepherding, rather than another gift that Christ has bestowed upon them. The apostle Paul explains this quite clearly in 1 Corinthians chapter 12, where he explains that we are all parts of the body of Christ and one party of the body cannot say to the other that they have no use for them. But is there a difference between a “Christian” pastor and a non-Christian “pastor”? Is there a difference between a Christian sermon and one that is taught at a mosque? The identifiable differences are the same as that of a Christian song would have over a non-Christian song. One would be in alliance with Scripture, regardless of the topic within the content. A Christian pastor would also be one that is in accordance with scripture. We can identify that a pastor is a legitimate pastor by looking at his fruit and his teachings to determine whether they line up with scripture.

If you are a Christian artist, your songs will line up with scripture whether or not you prefer the label. Much like the early Christians, it is their actions in word and in deed that provided the outside world with the evidence to call them a Christian. If you do not want fellow believers or the world to describe you in such a way, you would have to ask yourself…why?

Being labeled a Christian by the outside world should not be something we run from. Whether you are a plumber, electrician, principal or janitor, if someone called you the “Christian librarian”, it should be a badge of honor that represents the Christ who lives in you.

For Lauren Daigle, she actually said she didn’t like being referred to in this way:

“I feel like those labels get put on you by other people. I was reading articles, I read them here in there, and one of them said Christian artist and the other ones said just artist. But I think part of me is just an artist because it encompasses everything. That’s kind of how I see myself.” (Source)

If there was ever a label that someone should call you which encompasses who you truly are, what greater label than one which means “a follower of Christ”? If the outside world believes that this label represents your music, what greater compliment? If the term “artist” represents you better than Christian artist, I have to wonder what it is you prioritize.

I’ve been a wrestling coach for 11 years and I will tell you right now, I would much rather be referred to as a Christian wrestling coach than simply a wrestling coach. The way I coach, the way I talk to my wrestlers, the priorities I have concerning the way they leave after high school, are all better encompassed by my Christian faith. It is the very lense in which I coach through, and if the term “coach” better describes me, then I’ve failed as a Christian.

Nobody is asking anyone to wave a flag with a cross on it and proclaim themselves a “Christian Artist”. In fact, I would argue that if you had to do that, what sort of content are you putting out? The only concern would be those who would not want their “art” to be associated with the name of Christ. In true Socratic form I ask…why?

Here is an excellent short video on this subject (1:32):