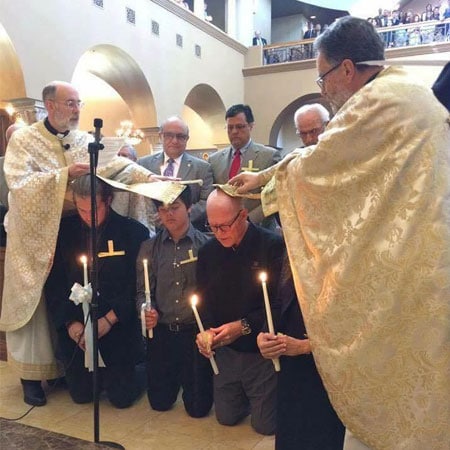 The following image is a picture of Hank Hanegraaff reportedly being “Chrismated” or confirmed into the Greek Orthodox Church.

“To the numerous Protestant/Evangelical/Non-Denominational Christians that have been sharing my post on the news of Hank Hanegraff’s conversion to the Orthodox Christian faith: Welcome! Greetings in Christ as we approach the feast of our Savior’s glorious Resurrection.”

We have always had doctrinal differences with Mr. Hanegraaff over the years, but at this point it seems that he is in deep need of prayers.

So what is the Greek Orthodox Church all about?

It is a branch of Eastern Orthodoxy, which formally broke with the Western (or Roman Catholic) Church in AD 1054. Even though the Greek Orthodox Church is separate from Catholicism, many of its practices are similar, such as the veneration of saints. The term orthodox means that they believe they hold the correct opinion on true Christianity. The Greek Orthodox Church claims to trace its roots to the apostles and early church fathers, calling itself “the Mother Church of Christendom.” While they do hold to many foundational truths of Christianity, such as the Trinity, they have also added many practices and beliefs at variance with biblical Christianity.

Many Greek Orthodox Churches conduct their Sunday service, called a Divine Liturgy, in Greek, which is a problem for anyone who does not speak Greek. Their structure more resembles Catholicism than Protestantism. Worship services are filled with formality, ritual, and choral music. Within a typical 75-minute service, they will light candles for various reasons, kneel in tandem, kiss icons, and make the “sign of the cross,” although they repeat the gesture backward from the way Roman Catholics do. Observing the Eucharist is central to their service and for continuing their “process” of salvation.

To learn about a few Greek Orthodox practices that differ from evangelical Christianity, please continue reading at GotQuestions.org