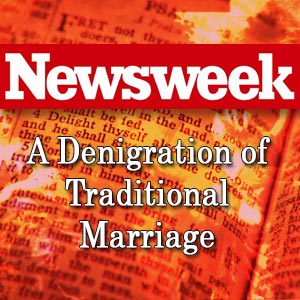 Once again, Newsweek, in their far left quest to justify moral relativity and promote licentiousness among the masses, has set out to vilify Holy Scripture. This is because Newsweek recognizes that the last strongholds of traditional morality in America are built on strong biblical convictions regarding human sexuality and marriage. If Newsweek is to “help” us finally realize the counter-cultural, utopian dream of the hippie movement of the 1960’s, which sought to marginalize marriage and champion “free sex” without supposed consequences, they must encourage us to jettison our moral compass. This is why Newsweek must attack either biblical authority or the biblical message. In this case, Newsweek attacks both!

In the latest edition of Newsweek (February 6, 2011), Lisa Miller, in her article entitled, “What the Bible Really Says About Sex,” would have us side with the understanding of the so-called “New Scholarship” on the left, represented by information gleaned from the books and writings of Jennifer Knust and Michael Coogan.

Miller would have us accept this new understanding of Scripture by confessed liberals over and above the biblical understanding of millions of Christians and Jews who have lived out monogamous, heterosexual relationships for thousands of years. To anyone who is somewhat conversant with what God’s Word teaches on human sexuality, it quickly becomes evident that their “new” understanding of God’s revelation on marriage and sexuality is, to put it nicely, full of holes.

Miller admits, “The Bible is stern and judgmental on sex. It forbids prostitution, adultery, premarital sex for women and homosexuality,” but then she adds, “But exceptions exist in every case, Knust points out.” Jenny Knust, representing the “new scholarship” of the left, makes serious categorical blunders in her woefully faulty argumentation. Knust repeatedly elevates narrative describing the immoral behavior of fallen individuals to the level of biblical doctrine.

For example, Millers cites Knust’s reference to the prostitution of Tamar (totally ignoring the context) as though it were an acceptable biblical practice. Because the Bible records the historical ups and downs of its human subjects does not mean that their moral failures are acceptable for doctrine or examples for life and practice. The fact that the Bible faithfully records the warts of even its most admirable figures (except, of course, the sinless Jesus) is one of the many evidences of its inspiration and authenticity. To take moral failures and place them on par with, or in contradistinction to, clear biblical doctrine is what the apostle Peter called “twisting the Scripture” to ones “own destruction” (2 Peter 3:16-17).

To point to an instance of prostitution in the Bible and thereby claim it is an acceptable biblical practice would be like justifying murder and adultery because King David murdered Uriah and slept with Bathsheba. Both of these immoral acts are repeatedly condemned in Scripture, as are all the other vices for which the “new scholarship” on the left is feigning God’s approval (1 Corinthians 6:9-10; Ephesians 5:5-8; Galatians 5:19-21, 6:7-9; Revelation 21:8, etc.).

Knust takes wholesome, platonic relationships and puts a homosexual spin on them. It is implied that since “Naomi and Ruth … vow to love one another until death,” that they are lesbians. Newsweek fails to inform the biblically uninformed reader that the context had to do with Naomi’s Moabite daughter-in-law who, having lost her husband, converted to the worship of her mother-in-law’s God, Yahweh, and identified with her and her people (Ruth 1:16-18). In the subsequent chapters in Ruth we read one of the most wonderful love stories ever penned. We read of Ruth marrying Boaz (a man), bearing his child and ending up in the genealogy of Jesus!

Of course, acknowledging the context not only demolishes Knust’s premise, but also delivers an insufferable blow to the religious syncretism espoused by the left. Knust also follows the long-debunked claim of some in the homosexual community, blasphemously claiming that King David “enjoyed sexual satisfaction” with Jonathan. Never mind that there is not a single passage in all of Scripture that states that David or Jonathan were homosexuals or that they had a homosexual encounter. The Scriptures are clear that David loved women, and in at least one case too much! Moreover, we read repeatedly that David thoroughly delighted in God’s law, which repeatedly prohibited homosexuality (Psalm 19:7-14).

Newsweek further opines, “The story of Sodom and Gomorrah is, as everyone knows, a story of God’s judgment against homosexuality, promiscuity, and other kinds of illicit sex. Except, Knust argues, it’s not. It’s a story about the danger of having sex with angels.” However, even if we were to allow for Knust’s dogmatic premise, it is clear from the narrative that the men of Sodom were seeking out homosexual relations, and this story is used in Scripture as a warning against all unlawful sexual practices, including homosexuality. Jude, the half brother of Jesus, warned, “In a similar way, Sodom and Gomorrah and the surrounding towns gave themselves up to sexual immorality and perversion. They serve as an example of those who suffer the punishment of eternal fire” (Jude 1:7).

We are told by Newsweek, “Those who follow the gay-marriage debate are likely familiar with certain bits of Scripture. Two verses, from Leviticus, describe sex between men as ‘an abomination’ (in the King James translation). Another, from Romans, condemns men who are ‘inflamed with lust for one another.’” However, the truth is that there are far more than just two or three verses or a mere “bit” of Scripture that condemn homosexual practices (Genesis 19:5; Leviticus 18:22; Leviticus 20:13; Romans 1:24-32; 1 Corinthians 6:9; 1 Timothy 1:10; Jude 1:7-8; Revelation 22:14-15). The passage referenced by Lisa Miller in Romans is several verses long and condemns not only male homosexuality but lesbianism as well (Romans 1:24-32).

Miller points out that Coogan claims that feet in the Bible are sometimes a reference to male genitalia and even goes so far as to claim that “sexual innuendo may be present” in the gospel of Luke, when he records a woman publicly kissing and washing Jesus’ feet. To Miller’s credit, she does acknowledge, “Scholars agree that in this case, a foot was probably just a foot.” That blasphemous gaffe alone shows you that these writers will seek to find perversion wherever they possibly can to justify their own perverse views. “To the pure, all things are pure, but to those who are corrupted and do not believe, nothing is pure. In fact, both their minds and consciences are corrupted” (Titus 1:15). That the left is searching for loopholes in the biblical narrative to justify their fornication, whoremongering and sodomy is on full display when Miller states, “The Bible doesn’t have to be an invader, conquering bodies and wills with its pronouncements and demands. …”“Woe to those who call evil good and good evil, who put darkness for light and light for darkness, who put bitter for sweet and sweet for bitter” (Isaiah 5:20). Sadly, we are living in such times.