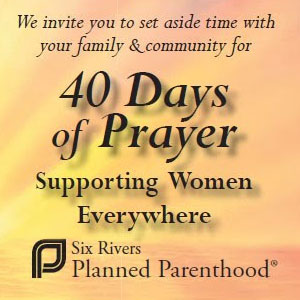 Six Rivers Planned Parenthood in Humboldt County, California is calling for “40 Days of Prayer” to protect abortion. You read that correctly! The Humboldt County clinic, with the help of an organization called Faith Aloud, has set aside March 18 thru April 27, 2012 for what they call “prayer and contemplation” for their abortion mills. The legal group, Liberty Counsel, got it right when they correctly stated, “Planned Parenthood’s attempts to develop a ‘spiritual’ aspect to the pro-abortion argument can seem comparable to the religious leaders in Germany who supported Adolf Hitler and the Nazis. It was wrong then and it is wrong now.”

It would appear that Planned Parenthood and Faith Aloud, the creator of “40 Days of Prayer,” have put this gimmick together as a response to the pro-life movement’s successful campaign “40 Days of Life,” which was instrumental in saving hundreds if not thousands of lives by helping to close 22 abortion clinics.

So what are some of the suggested prayers during this 40 days of “prayer and contemplation”? Here are some samples from their official brochure (PDF – Adobe Acrobat Reader Required):

“Day 6: Today we ask for blessings upon the women who pass through hostile protestors on their way into an abortion clinic. …”

“Day 7: Today we pray for the 45 million American women who have had safe, legal abortions. May they stand tall and refuse shame.”

It would seem that Planned Parenthood needs to fact check their information. According to the Guttmacher Institute, there have been approximately 50 million legal abortions performed in the United States between 1973 (the year of the Supreme Court’s decision on Roe v. Wade) and 2008. That number is no doubt much higher today in 2012.
[Source: Jones, Rachel K. and Kathryn Kooistra. “Abortion Incidence and Access to Services in the United States, 2008.” Perspectives on Sexual and Reproductive Health 43, no. 1 (2011, March): 41-50]

“Day 14: Today we pray for Christians everywhere to embrace the loving model of Jesus in the way he refused to shame women.”

“Day 25: Today we pray for women who have been made afraid of their own power by their religion. …”

“Day 29: Today we pray that all women will know that they are created in the image of God, good and holy, moral and wise.”

While it is true that we are created in the image of God, the bible says, “There is none righteous, not even one” (Romans 3:10). Isaiah 64:6 states, “But we are all as an unclean thing, and all our righteousnesses are as filthy rags.” Without Jesus Christ we are nothing!

“Day 34: Today we give thanks for the abortion escorts who guide women safely through the hostile gauntlets of protestors.”

“Day 38: Today we pray for a cloud of gentleness to surround every abortion facility. …”

What I find very interesting when reading the 40 daily prayers is that there is no mention of the babies. What about all of the suffering of the babies that are murdered, often times through barbaric abortion procedures?

Proverbs 6:16-17 states that God hates “hands that shed innocent blood.” Deuteronomy 27:25 says, “Cursed be he that taketh reward to slay an innocent person. And all the people shall say, Amen.”

Do the religious clergy involved in this 40 days of “spiritual” contemplation truly believe that the God of the bible is hearing the prayers of those participating in this gimmick? Who is recognizing, speaking up and praying for the little babies? Once again their choice, their life, their safety, their “cloud of gentleness” is not being considered…