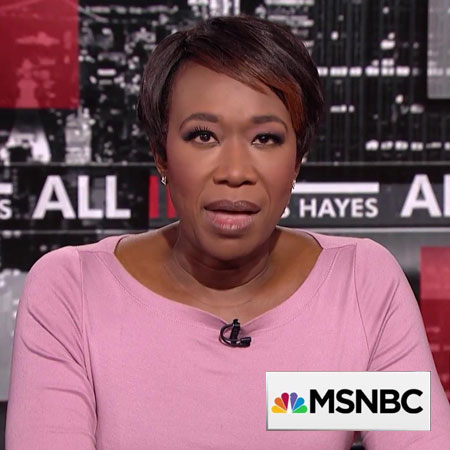 In President Trump’s State of the Union speech he stated, “In America we know that faith and family, not government and bureaucracy, are the center of American life. The motto is: In God we trust.”

Such sentiments are anathema to much of the liberal elite. After Trump’s speech, MSNBC host, Joy Reid, took to twitter and declared “Church … family … police … military … the national anthem … Trump trying to call on all the tropes of 1950s-era nationalism. The goal of this speech appears to be to force the normalization of Trump on the terms of the bygone era his supporters are nostalgic for.” (Source) 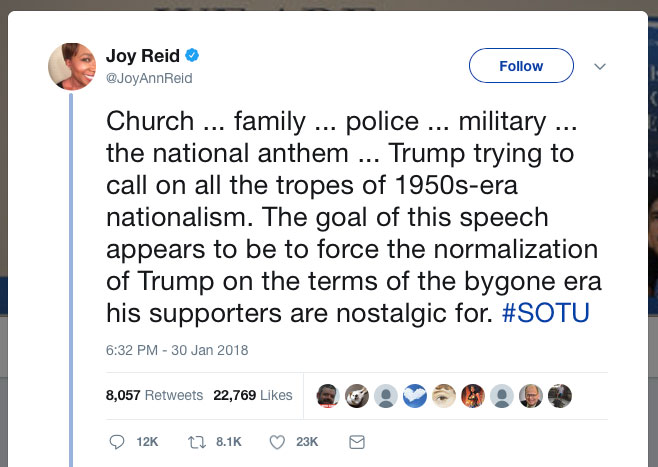 For the far left, reliance on family is a deterrent to big government and God is typically only invoked as an expletive. Let’s not forget Obama’s castigation of those in the working class who “cling to guns or religion.” Even Hillary Clinton stated, “His remarks are elitist and out of touch.” Never mind the fact she would refer to many of these same people as a “basket of deplorables.” Many liberals prefer we look to political leaders as God, and government as our “big brother”. After all, in Hillary’s words, “It takes a village.”

Joy Reid’s declaration against faith and family are part and parcel of a greater spiritual movement among the liberal elite to destroy both faith in God and the family. God’s prophetic word reveals “that in the last days difficult times will come. For men will be lovers of self … without love … haters of good” (2 Timothy 3:1, 3). The Greek word that Paul used that is translated “without love” is “astorgos” and literally means, “without family love.”

As did communists of the past, the far left sees the family as an enemy to their agenda. For instance, Travis Rieder, writing for NBC, warned that “[H]aving a child is a major contributor to climate change.” Melanie Phillips, one of Britain’s most prominent journalists, abandoned the far left when she saw their attacks on the family in favor of liberal Marxist ideologies. After pouring through thousands of statistics, Phillips discovered the profound connection between family unity, biblical morals, and national stability. All of this eventually led her to the bible.

Phillips wrote, “And when I started writing about family breakdown, I was also called ‘an Old Testament fundamentalist.’ At the time, I shrugged this aside as merely a gratuitous bit of bigotry. Much later, however, I came to realize that it was actually a rather precise insult. My assailants had immediately understood something I did not myself at the time understand, that the destruction of the traditional family had, as its real target, the destruction of biblical morality.” (Melanie Phillips, Guardian Angel: My Journey from Leftist to Sanity, Post Hill Press, 2018)

Phillips came to understand that the far left don’t simply have antipathy toward the family, but are actively trying to destroy it – by destroying biblical morality.

Many who are now in the power structures of the U.S. were spawned by the counter culture of the 1960’s, which championed “free sex,” “illicit drugs” and the licentious philosophy of “Do your own thing.” John Lennon even went so far as to write the Beatles famous song, “Come Together,” as a campaign song for Crowleyan Satanist, Timothy Leary. Lennon admitted:

“Come Together” was an expression that Leary had come up with for his attempt at being president or whatever he wanted to be, and he asked me to write a campaign song … I came up with this, ‘Come Together.’” (David Sheff, All We Are Saying: The Last Major Interview with John Lennon and Yoko Ono, New York: St. Martin’s Press, 2000)

Leary’s philosophy for the U.S. was based on the teachings of Satanist Aleister Crowley, as he told PBS:

“I’ve been an admirer of Aleister Crowley. I think I’m carrying on much of the work that he started over a hundred years ago. I think the 60’s themselves, you know Crowley said … ‘Do What thou wilt shall be the whole of the law’ … I’m sorry now that he isn’t around to appreciate the glories that he started.”

The “glories that he started”? Like nearly 60 million innocent children murdered via abortion and millions of families and young people destroyed through the glorification of sexual sin and illicit drugs? Crowley pronounced, “Family: Public Enemy No. 1” and wrote of the “Horrid word, family!”

Crowley promoted child sacrifice and wrote, “I was not content to believe in a personal devil and serve him, in the ordinary sense of the word. I wanted to get hold of him personally and become his chief of staff.” He also declared “I peck at the eyes of Jesus as he hangs upon the cross.” Crowley’s goal was to pave the way for the “new aeon” of Antichrist, and he hoped that he himself would be the beast prophesied in the Book of Revelation, even signing his letters, “The Beast 666.”

The children of the 1960’s have grown up, and many are now promoting a satanic agenda against the family. I documented in our video, Lady Gaga, the Super Bowl, Satanic Spirit Cooking and Child Sacrifice, that when it was discovered through Wikileaks that Marina Abramović invited Hillary Clinton’s campaign manager, John Podesta, to a “spirit cooking” dinner, that she had earlier promoted a recipe of such “spirit cooking” that consisted of Crowley’s “cakes of light”. Crowley’s recipe for “cakes of light” called for the flesh of sacrificed children!

In our video, The Dark Secrets of Planned Parenthood, we document that Planned Parenthood’s founder, Margaret Sanger, was an occultist and white supremacist eugenicist, who targeted African American neighborhoods for murder via abortion.

When Alfonso Aguilar mentioned that “52% of all abortions are performed on Latino and African-American…” [children], and began to expose the dark underbelly of Planned Parenthood’s founders, Joy Reid cut Aguilar off and censored him from speaking on the subject, “Okay, I think that smear on Planned Parenthood cannot go forward, we are not going to continue with that line of questioning.” No wonder Reid castigated Trump for highlighting the importance of Church and family. May God give us grace to stand against this great darkness!