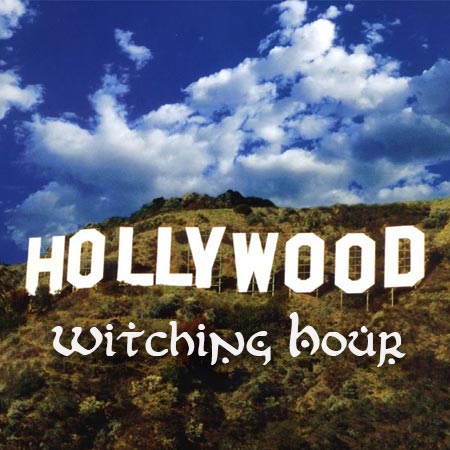 Hollywood’s promotional images of witchcraft have radically shifted since the Wizard of Oz. Quite the opposite of the 1939 era, it is now considered chic and fashionable to engross oneself within the detestable practice of witchcraft. Hollywood has successfully contributed to this new acceptable schooling process, re-introducing it as "good" instead of evil. Zeena LaVey, the daughter of the Church of Satan’s Anton LaVey, is known as the strongest proponent of the Satanic doctrine and writes:

“As a Satanic consultant, I have had to re-educate many a newcomer to the true meaning of witchcraft, a meaning opposed to the pervasive Wiccan "good witch" syndrome…. The woman who grasps and fully understands the mastery of the world inherent in this books Satanic teachings will usher in a true feminism: the liberation of the demonic in every woman.”

LaVey’s reeducation of the evil depravity that witchcraft truly offers is gaining a foothold largely due to Hollywood’s socially upstanding portrayal of witches.

The fallacy of the Wiccan "goodness" LaVey confesses to results from a full-blown counterfeit portrayal of witchcraft. The word Wicca is an ancient English word meaning, "wise ones;" speaking of those who through initiation into the occult arts gained a special insight via the demonic spirits contacted. Just as Wicca means wise ones, the etiology of the word demon means "knowledge." Through contact with knowledgeable demons, ordinary human beings appear to manifest a higher degree of knowing. This accounts for witches having a supernatural ability to conjure up the unknown.

Gerald B. Gardner is credited with the modern day revival of Wicca. Throughout his life Gardner was fascinated with many different aspects of the occult. He had been a follower of the Satanist Aleister Crowley and a member of Crowley’s occult lodge Ordo Templi Orientis. It is known that Gardner copied Crowley’s rites and rituals, which fully embrace and promote his doctrines of Satanism, and presented them as Wiccan. Doreen Valiente was personally initiated by Gardner into Wicca and became a life long close friend. She said:

“Gerald Gardner got to know Aleister Crowley when the latter was living at Hastings, a year before Crowley died. He was taken to see Crowley by a friend, and visited him on a number of occasions thereafter, until Crowley’s death in 1947. Crowley took a liking to G.B.G., as a fellow student of magic, and made him an honorary member of Crowley’s magic order, the Ordo Templi Orientis. G.B.G. admired Aleister Crowley…and was fond of using quotations from Crowley’s works in his rites.”

When questioned by Valiente about these rites, Gardner responded positively. She revealed:

“[Gardner] gave me to understand that the rituals he had received were in fact fragmentary. There were many gaps in them; and to link them together into a coherent whole, and make them workable, he had supplied words which seemed to him to convey the right atmosphere, to strike the right chords in one’s mind. He felt, he said, that some of Crowley’s works did this.”

As a follower of Crowley, Gardner’s aim was the seduction of the youth. Valiente writes, “Gerald Gardner decided that somehow the Craft must send out a call to the younger people.” Several Hollywood productions have successfully fulfilled Gardner’s desire and evangelized a host of young followers as result. The 1960’s found a new brand of witchcraft under the guise of the “comic witch.” Bewitched, I Dream of Jeannie, The Munsters, The Ghost and Mrs. Muir, and The Addams Family, were successful, according to the book The Church of Satan, at “initiating a new generation of Satanists into the mystery, fun and satisfaction of magic.” As time went on, witchcraft was able to express itself more freely on the silver screen which led to more and more of the nation’s youth into witchcraft. One avid viewer wrote that as

“a child I religiously watched ‘Bewitched,’ my favorite TV show. This show sparked my interest in spiritual powers. I read books on ghosts, ESP, palm reading, and even spells and curses. I also played with a magic eight ball, Ouija board, and magic set. I knew that there was evil power in the world and I wanted that power to get back at my mom for the way she treated me.”

Hollywood’s acclamation of witches is proof positive in the multiple movies it has offered throughout the decades. More recently, in 1996, a movie entitled The Craft, starring Robbin Tunney, Fairuza Balk and Neve Campbell, stormed movie theatres. The movie depicted four young girls all eager in their pursuits of witchcraft. Full explanations about the invoking of demonic spirits as well as enactment’s of rituals to summon spirit possession litter the movie. These witchcraft truisms were incorporated into the film as teaching tools for the unsuspecting public. Did it work? Raven Mounani, owner of the occult store, Raven’s Flight, and herself a practicing witch credits The Craft with encouraging young women to explore the world of witchcraft. She states:

“I get a lot of teenage girls in here. You can always tell when The Craft has been on TV cause we get a big influx of girls looking for supplies.” 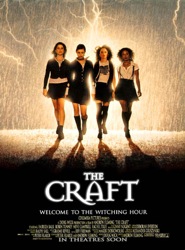 In fact, Neve Campbell admits that a witch was brought on the set to properly instruct and guide the movie. She says, “Something I found intriguing is that we had an actual witch on the set with us, talking with us and coaching us through the scenes.” She told Australian TV Hits that while filming the movie, the actresses “were all sent books on witchcraft.” Apropos, the movie is replete with detailed conversations regarding the practice of witchcraft including the worship of nature, God and Satan existing as one, and invoking of spirits. One ceremony is conducted in which one of the witches becomes possessed by an evil spirit and is granted powers over others. In his Book of Shadows, Gardner listed eight ways to raise magical power, of which all were shown or at least referenced to in the movie. Hollywood’s agenda of targeting the youth compliments the insidious plans mapped out by Crowley and Gardner. Superstar of television and motion pictures, Campbell’s role as a witch was sure to bring in a barrage of her young idolizing fans. Campbell is well aware of her influential abilities that communicate to the youth of the world. She puts it this way:

“People always ask, ‘What’s it like to be looked up to by so many teens?’ It’s a wonderful position to be in. It’s wonderful that people look up to me and they can learn things…. I acknowledge that I have this huge impact on teenage girls…”

Due to the real connection between Satanism and witchcraft, Satan is the true envoy of witches and is using the Hollywood elite to sell the youth his destructive lies. No good thing comes out of these lies, and the facts prove it. Almost thirty years ago, the insurmountable evidence was already beginning to pour in. In 1973, Psychic Roulette wrote: 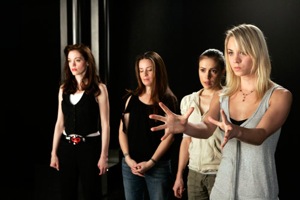 Up until a couple of decades ago, and for previous centuries, there were no admitted witches anywhere. Most people have thought of witchcraft as something that only the superstitious gave any credence to. Today, in a massive spin off from the culture wide interest in the occult, this has all changed. Tens of thousands across America-some of them with university degrees-are dabbling in witchcraft, Satanism, voodoo, and other forms of black and white magic. Witches appear openly on television…. There are some 80,000 persons practicing white magic in the United States, with 6,000 in Chicago alone. Some of this is a fad. But unfortunately, much of it isn’t. Murder after murder has been linked to this craze, with the murderers openly admitting to police or to reporters that they worshipped Satan. Police, more and more frequently are finding grim evidence of both animal and human sacrifice. (PR’73p99-100) This information was written at a time of moral excellence in comparison to where we are at today. Witchcraft is aired on station after station and glorified as upright in the theaters.

Fairuza Balk, one of The Craft’s witches, proclaimed her occult ties when she purchased the nations oldest occult shop, Panpipes Magickal Marketplace, the occult supplier and technical advisor to the film and TV industry. Magickal is spelled with same characteristic spelling created by Crowley- usage of the letter k in the word magic. Panpipes Magickal boast that “Our clientele include some of the most familiar names in the entertainment world.” Crowley’s books are available en masse at Panpipes with many of the Hollywood elite being disciples of the occult traditions via witchcraft. Balk boasts: “A lot of actors who don’t mention their names of course are very much into this.”

The Scriptures foretold that in the last days Hollywood types would take the worlds center stage and declare Satan’s lies en masse. Paul the apostle wrote:

"The Spirit clearly says that in later times some will abandon the faith and follow deceiving spirits and things taught by demons. Such teachings come through hypocritical liars, whose consciences have been seared as with a hot iron…Have nothing to do with godless myths…rather, train yourself to be godly. For physical training is of some value, but godliness has value for all things, holding promise for both the present life and the life to come." –1 Timothy 4:1-2,7-8

We have our warnings and our marching orders. 1 Corinthians 15:58 states:

"Therefore, my dear brothers, stand firm. Let nothing move you. Always give yourselves fully to the work of the Lord, because you know that your labor in the Lord is not in vain."

Let us be found faithful until the end and press on toward the high calling that God has for each of His children and avoid the obvious pitfalls and delusions that the world places before us.