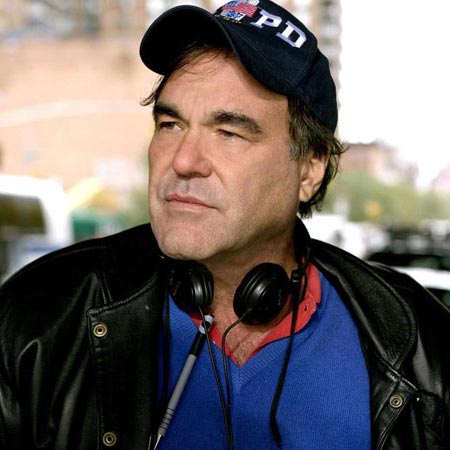 Oscar winning film director Oliver Stone is well known for producing movies that trouble. He is highly regarded for such films as Platoon, Wall Street, Born on the Fourth of July, The Doors, Any Given Sunday, JFK, and Natural Born Killers; also screenplays for Conan the Barbarian, Scarface, and Year of the Dragon. He has won worldwide popularity for his re-rendition of historical events and his abject films have projected a degradation of humanity completely harmonious with the demonic realm. As a cinematic shaman, Stone casts his magic spell on his viewers, enticing ungodly desires under the cover of theater darkness. Appropriately, his biography, Wakeup Cinema, summarizes one of his movies as “a thriller about demonic evil.” Ultimately, Stone’s purpose for movie making is to forward his own corrupt viewpoints by way of his films.

According to Stone, expression in his films is formulated around the basic question, “What is the lowest level I can descend to” Stone describes his target audience: “Possibly I go for the lowest common denominator, in terms of getting the message across, in terms of getting what I want to say across.” The Bible says, "all have sinned," and "there is no man who has not sinned." The one common denominator mankind have in common is sin. Stone also views his role as somewhat messianic. “It was as if we had been linked by destiny,” says Stone. “Chosen as God’s instruments to get a message, a memory out…” This agenda for his movies revolves around the central truth that movies communicate, which he very well knows. 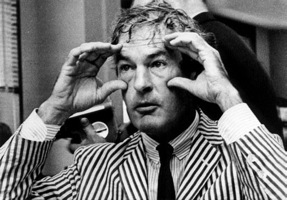 The Scriptures say that Satan "works through the sons of disobedience," and Oliver Stone definitely qualifies as such. Timothy Leary, the follower of Satanist Aleister Crowley, who was seeking to bring the world into the Age of Aquarius through drug use, found an avid promoter in Oliver Stone. Of his early days, Stone says, “It was a wild time. I was doing a lot of drugs. Grass and acid. I was into Timothy Leary…” Stone’s films project a rebellious ‘do your own thing’ message that fits right in with Satan’s objective. Confidant and good friend Richard Rutowski informatively relays that through film Stone releases the “demonic” hodgepodge of his uncontrolled mind,

“It’s (film) an exploration of what’s going on inside him. It’s analytical to a point, but he doesn’t have control over it. I think that’s what he’s looking for- how to control it. He has control of the medium, but I don’t think that he has control of his mind…. He’s constantly trying to explain that and put those demons on celluloid- writing and filmmaking are his psychotherapy.”

Stone’s initiation into the New Age mindset has reflected in his work at practically every level. Stone’s 1991 blockbuster, The Doors, pivoted around these beliefs. The movie centers on the delinquencies of the musical band, The Doors, and specifically the unrestrained life led by the bands lead singer, Jim Morrison. Morrison admitted to being possessed and acting as a medium for spirits. Stone had sent the original copy of his first Doors screenplay to then living Jim Morrison some twenty years prior, because he claimed it’s inspiration had come from The Doors lyrics. He stated:

“The concept was that the movie was all in Jim’s lyrics. I picked the songs I wanted and wrote each piece of the movie as a mood to fit that song…. I trusted to his lyrics to tell the tale.”

Morrison believed he received his music from Satan and lyrics such as “Cancel my subscription to the resurrection. Send my credentials to the house of detention. I got some friends inside,” support this as fact. These lyrics are what Stone wanted the world to adopt as their own.

Doors keyboardist Ray Manzurik denoted Morrison as “a shaman” when referring to his ability to move his fans. Come 1990, in preparation for the making of The Doors, Stone’s own personal integration into shamanism reflected in his proclamation, “I identified with Morrison…. He was a shaman. He was a god for me, a Dionysian figure, a poet, a philosopher.”

Occultist Colin Wilson describes shamans as “something closer to mediums,” who invites demonic spirits until characteristically “he passes into a trance.” Similarly, Stone states, “I’m seeing someone separately where I work in a trance state…I believe in meditation. I believe in prayer; you should go to deeper levels.” Wilson says that the shaman’s viewers “believe everything that he tells from his trance.” Stone’s viewers do too, and they obey him as well.

Quite interestingly, Wilson also describes the shaman’s influence over tribal disciples from an occult perspective. The disciples, Wilson says, “sit there in the dim light, their attention riveted on his every move. The shaman’s excitement communicates itself to the circle of spectators, and the larger the audience, the stronger the empathy between them and him.” Satan is able to carry on these same traditions through movie’s today. Just as a shaman is able to transfix the attention of his audience, Stone’s films act as his instruments to leave the audience spellbound in the dim light, riveted for change. “I’m trying to reshape the world through movies,” he admits. Perhaps the most disturbing of Stones reshaping of the world consciousness is his film, Natural Born Killers. This movie documents a couple set on a torrentious mission of murderous mayhem, killing 52 people in three weeks, becoming media sensations in the process.

“In my 15-plus years of law enforcement in Coweta County, we’ve never had any type of crime like this.” Wrought with confusion, Sheriff Mike Yeager spoke these words of the double homicide that stunned the small town of Newnan, Georgia. On Sunday, March 5, 1995, 15 year old Jason Lewis loaded his fathers shotgun with 12 gauge shells and strutted into the family room. He then opened fire and proceeded to blow the faces off his two unsuspecting parents. The motive? Police say that Jason wrote his friends that he wanted to live out the story of Stone’s film, Natural Born Killers. According to investigator Mike Kinsey, Jason was not the only one who desired to emulate the murderous movie but his friends did too. Kinsey stated:

“They planned to run away with Jason and they were infatuated with the idea of killing. From interviews with friends [we found out that] it had been discussed that they would even kill a school official.”

One friend reportedly told Jason, “Let’s kill ’til we are killed.” Just as the movie was the impetus for Jason’s murders, Jason’s murders will act as impetus for future catastrophe. Cowetta County District Attorney Pete Skandalakis said, “One of the problems-Jason Lewis has become kind of a folk legend among the younger kids. Some have said, ‘I wish I had the guts to do what Jason did.’”

Other real life cases litter the world. Christopher Smith, 18, shouted into television cameras, “I’m a natural born killer!” after shooting an eighty-two year old man to death. Not only the name of the movie, this phrase echoes the main characters own words in the film.

Seventeen year old Nathan Martinez, obsessed with Natural Born Killers, viciously murdered his stepmother and half sister near Salt Lake City. He was so taken in by the film that he shaved his head and sported tinted granny glasses to mimic the movie’s bloodthirsty slayer. While evading authorities, Martinez told a friend, “It’s nothing like the movies. They’re dead. They’re just dead.”

One of two teenagers responsible for killing a man the way the movies protagonists do, then proceeding to nearly killing a woman in a convenience store (who is now quadriplegic) exclaimed that the movie led directly to their actions. 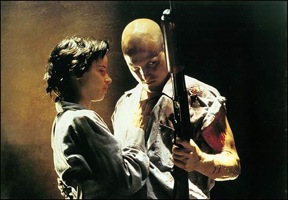 In Toombs County, Georgia four rampagers were charged with abducting and killing a man, and stealing his truck after watching the movie 19 times. When apprehended by police, they continued to use the names of the main characters as their own in corresponding with each other. Stone’s creativity has hexed family values and traditional morality by severing life and propagating murder in their place.

Fascinatingly, Anton LaVey, founder of the Church of Satan, also refers to himself as a shaman for the purpose of gathering know-how in order to cast spells. LaVey says, “As a shaman or magician, I am concerned with obtaining recipes…. My concern is with how to best hex someone.” LaVey’s usage of film as the vehicle of choice for hexing the world in preparation of the Antichrist is already blatantly obvious. What is Stone’s manipulative hex? As the body count continues to rise, as people lose loved ones to senseless acts of violence, as mothers have their babies torn from them and turned into killing animals by a Satanically fueled merciless machine, Stone has commented:

In the true style of a shaman, Stone communicates his heart wrenching philosophies while visually alluring his audience’s attention to break into their consciousness. Of his films he confesses, “I was trying to tap the American consciousness.”

Parents, if you are not yet privy to Satan’s schemes, wake up and smell the spiritual coffee. The Bible forecasts the last days to be filled with violence, even as it was in the days of Noah. Violent associations definitely yield a violent life and movies are the avenue of choice for teaching these doctrines of demons. Children are being programmed much more efficiently than Hitler’s Nazi propaganda machine ever dreamed of doing. Stone indoctrinates today’s children through his films by unleashing:

“the pure wash of emotion across the mind to let you see the inner myth, the spirit of the thing. Then, when the cold light of reason hits you as you walk out of the theatre, the sense of truth will remain lodged beyond reason in the depths of your being.” 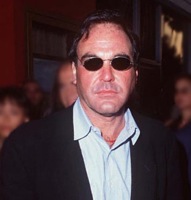 What kind of “pure emotion” and “truth” does Stone wish to permanently deposit in the depths of people’s being through his films? Stone says:

“I believe in Morrison’s incantations. Break on through. Kill the pigs. Destroy. Loot. F*** your mother. All that s***. Anything goes. Anything.”

This cold and manipulative “Do what thou wilt” mindset has been taught for so long in the classrooms of movie halls, that but for the grace of God, we would have no inkling of semblance remaining.

Not only Stone’s, but movies from all artists and genres effect social and spiritual change. They promote violence, drugs, sexual immorality, homosexuality, rebellion and occultism. The current "politically correct" bandwagon parading against violence in films should not be the benchmark of moral discernment for Christians. The majority of the time, society will not agree with our views. The apostle Peter tells us:

"In all this, they are surprised that you do not run with them into the same excesses of dissipation, and they malign you; but they will give account to Him who is ready to judge the living and the dead." –1 Peter 4:4-5

We have our marching orders, and whether the world agrees with us or not is of no consequence. To shun the world with a godly rejection is of dire importance and parallels our obedience as a Christian. God has told the results of those who mingle with the productions of the world:

"They mingled with the nations and adopted their customs. They worshiped their idols, which became a snare to them. They sacrificed their sons and their daughters to demons. They shed innocent blood, the blood of their sons and daughters, whom they sacrificed to the idols of Canaan, and the land was desecrated by their blood. They defiled themselves by what they did; by their deeds they prostituted themselves."

Let us remain separate from the world and perfect holiness in the fear of God while transforming our minds through the power of the Word.