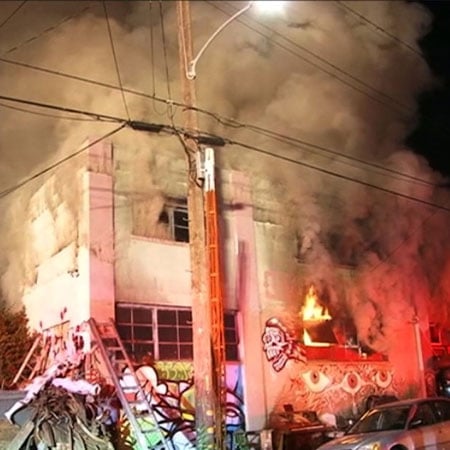 In the aftermath of the December 2, 2016 tragedy that destroyed the “Ghost Ship” club in Oakland, CA, claiming at least 36 victims, sad truths have now emerged that few people are aware of. The heartbreaking building fire, which was one of the deadliest in U.S. history, took place during what was to be an all night rave party. Raves typically employ hypnotic and psychedelic House music, hallucinogens like Ecstasy, and lots of alcohol.

The once abandoned and dilapidated warehouse (which was in serious violation of a number of safety codes, including zero fire alarms and ceiling sprinklers) was a death trap waiting to spring on its victims. 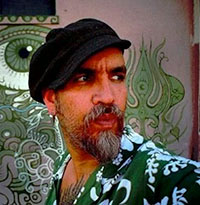 Many former employees claimed that Derick Ion Almena, the owner of the Ghost Ship and who ran the occult art commune, “laughed off” warnings from police and fire officials about the fire hazard the building posed. Oakland’s Planning and Building Department reportedly stated that Almena also failed to get the special permit necessary for the deadly December 2, 2016 rave.

After at least 36 people died in the fire, Almena further angered many more people after taking to Facebook and lamenting over his material losses while failing to mention any concern for the fire’s victims. Some tweeted their moral outrage with statements like “I hope you get charged with manslaughter” and “There is a special place in Hell for people like you!!!!!!!” 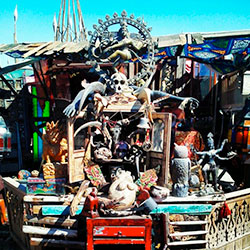 However, after the death tally rose and the smoke cleared, there are even more troubling revelations about the occult underbelly of the rave scene. The makeshift warehouse club, appropriately called the “Ghost Ship,” was apparently a stronghold of occult activity and paraphernalia. Pictured in this article are depictions of skulls as well as Hindu idols of Shiva and other demon gods. God’s Word declares: 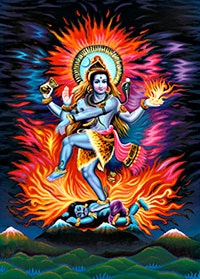 Shiva, the Hindu god of destruction, is apparently the most prominent false god that occupied the occult art commune, as can be seen in the photos. I find this interesting, as Shiva is at times depicted in art with fire, symbolizing his fiery destruction of the world, as can be seen to the right. Those who worship Shiva and practice Kashmir Shavism often use fire in their Tantric (sex) Yoga rituals, which is patterned after the Hindu Vedic ritual fires. (cf. David Frawley, Gods, Sages and Kings: Vedic Secrets of Ancient Civilization, Lotus Press, 1991) 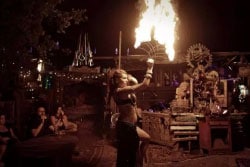 I also found it interesting that fire dances were done in this death trap, though this is not to say that this was the cause of the deadly fire (the cause is still unknown). Such rituals however, would be incredibly irresponsible and even deadly in such a derelict building as the “Ghost Ship.”

Another sad truth is that the fiery blaze broke out while the headlining band, Golden Donna, was preparing to perform. Golden Donna is the stage name for the Wisconsin based DJ and producer, Joel Shanahan. Some of you who have studied the occult have probably already thought, “That name seems a bit suspicious.” Indeed it is. Golden Donna sounds a lot like the occult group that Satanist Aleister Crowley once belonged to, the Hermetic Order of the Golden Dawn (or the Golden Dawn for short). 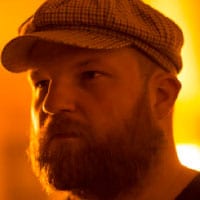 When looking for interviews with Golden Donna’s founder, it didn’t take long to confirm that Joel Shanahan had Satanist Aleister Crowley and his old occult group the Golden Dawn in mind when naming his group “Golden Donna.” When Shanahan was asked by Andrew Winistorfer of Vinyl in Alpabetical, “So, tell me about the name…” Shanahan admitted that one of his sources behind the inspiration of his naming of “Golden Donna” was Satanist Aleister Crowley and the Golden Dawn. Shanahan admitted:

“Golden Dawn: The organization that Aleister Crowley was involved with. And then Donna Summer. Just smooshed together. … I like how the name sounds. It’s two subjects I’m interested in.” (Source)

Eagles of Satan and the Terrorist Attack in Paris

While very few people are aware that the club that burned to the ground in Oakland, CA was to be headlined that frightful night by a band glorifying Satanist Aleister Crowley, many are also unaware that the nearly 90 people killed in the terrorist attack at the Bataclan Theatre in Paris, France were also being immersed in satanically-inspired music.

The tragic irony is that the terrorist attack in Paris ensued when the band Eagles of Death Metal were performing their satanic worship song, “Kiss the Devil”. The song’s lyrics reveal straight up praise and worship for Satan. In the song’s lyrics, written by the band’s founder, Jesse Hughes, we read: 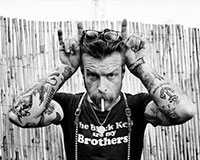 Just as they began to praise Satan to this song, they got their chance to “kiss the devil” when he came in the face of militant Islam, which is defined biblically as the spirit of Antichrist (1 John 2:22; 4:1-4).

The terrorists not only gunned down nearly 90 people with automatic weapons, but they used explosive vests with the incredibly volatile TATP (Triacetone Triperoxide), which is also known as the “Mother of Satan”.

While the Eagles of Death Metal band members temporarily escaped death, many of their fans tragically perished in a hail of bullets.

The truth is that about 150,000 people die every day and most are unaware of the moment they will draw their last breath. It is important that we make sure that we are right with God before that day comes upon us like a snare. While the Eagles of Death Metal promote Satanism and death in their music, God’s Word warns us to choose life:

“This day I call the heavens and the earth as witnesses against you that I have set before you life and death, blessings and curses. Now choose life, so that you and your children may live.” (Deuteronomy 30:19)

“For he who finds me finds life. And obtains favor from the LORD. “But he who sins against me injures himself; all those who hate me love death.” (Proverbs 8:35-36)

May those of us who still have an opportunity to turn to Christ for salvation before it’s too late, turn while there is yet time. The good news is that Jesus died for our sins on the cross and conquered death and the grave through His glorious resurrection. He promised that those who repent and place their faith in Him will pass from death to life and not come into condemnation (John 5:24). Choose life, choose Christ! Jesus promised:

“The thief comes only to steal and kill and destroy; I came that they may have life, and have it more abundantly.” (John 10:10)

May the Lord richly bless you as you seek His Face and live for His glory!